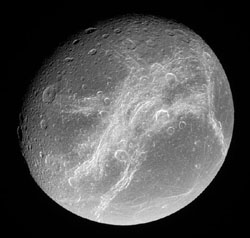 As seen by Cassini in 2006, Dione shows a tangle of enigmatic fractures on its surface that may have resulted from recent geologic activity.

Two more of Saturn’s moons may be geologically active — possibly even volcanic — according to a new study published in last week’s Nature.

Using NASA’s Cassini orbiter to look at how electrically charged gas called plasma moves around Saturn, scientists have discovered this vapor emitting sporadically from the direction of two of the planet’s largest moons, Tethys and Dione. This might indicate that these moons are releasing gas (from volcanoes or geysers, for example) into space.

Saturn rotates rapidly — in under 11 hours — as does its gigantic magnetic field, which envelopes several of its moons. The rapidly spinning magnetic field drives “cold” (low-energy) plasma outward into a wide, flattened disc, while hotter, more energized plasma moves inward toward Saturn to take its place. 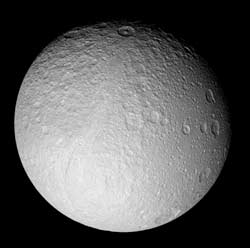 This mosaic image of Tethys' south pole shows old and fresh craters as well as the giant rift Ithaca Chasma.

“What no one had ever seen before was the outward flowing, higher-density, lower-energy plasma,” says Jim Burch (Southwest Research Institute). Using the Cassini Plasma Spectrometer, Burch and others traced two streams of this cold plasma along magnetic pathways back to the orbits of Tethys and Dione. The pairs of small satellites that share these big moons’ orbits are likely too small to produce so much gas, Burch adds.

This study “establishes Tethys and Dione as important sources of plasma in Saturn’s magnetosphere,” says Burch in a press release. The next phase of the investigation, Burch told Sky & Telescope, is to figure out the composition of the gas, which will reveal what kind of activity might be occurring on the moons. 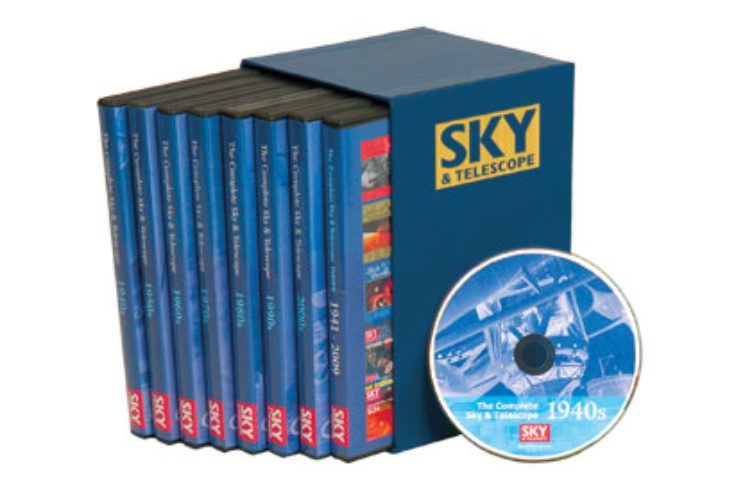 Own the Sky & Telescope Collection