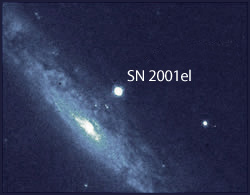 Amateur astronomer Berto Monard of Pretoria, South Africa, was the first to spot Supernova 2001el in the galaxy NGC 1448, located 60 million light-years away in Horologium. The star was presumably an exploding white dwarf. Surprisingly, its fireball proved to be asymmetric — about 10 percent wider in one direction than in the direction at right angles.

Astronomers have observed important new details about the type of supernova that has become crucial to tracking the history of the expanding universe.

Supernovae come from two very different kinds of exploding stars. One kind happens when the core of a massive giant star collapses to form a tiny, superdense neutron star or black hole. In this case the explosion energy comes from the core's gravitational collapse. The other kind, known as Type Ia, is a true nuclear bomb; it occurs when the bulk of a carbon-oxygen white dwarf suddenly undergoes a runaway fusion reaction. This happens when the dwarf collects just enough mass to tip it over the brink of nuclear instability. Most astronomers think a closely orbiting companion star provides the trickle of infalling matter that eventually overloads the dwarf.

All Type Ia explosions are very nearly alike, which makes them a wonderful "standard candle" for measuring galaxies' distances independently of their redshifts. This allows astronomers to track how redshifts themselves have changed with cosmic time — in other words, how the expansion rate of the universe has changed. Studies of Type Ia supernovae revealed five years ago that the cosmic expansion is speeding up, apparently under the influence of some unknown "dark energy" pervading the cosmos. It was one of the most important scientific discoveries of the last decade.

But Type Ia supernovae are not exactly alike, and how they actually work is more a matter of theory than observed fact. So astronomers are striving to learn all about them that they can. Several new findings have just been reported.

An international team of astronomers has determined that Type Ia supernovae do not always explode in a spherical manner. Lifan Wang (Lawrence Berkeley Laboratory) and three colleagues measured slight polarization in the light of Supernova 2001el, indicating that the expanding fireball was about 10 percent longer than wide as seen projected on the sky. If all Type Ia explosions are asymmetric by this amount, we'll sometimes see them appearing round (the way an egg seen end-on looks round) and sometimes oval (when seen broadside). In the latter case the same explosion will appear a little larger and brighter. But we're just seeing the same thing at different angles.

This effect could account for most of the small variations that are observed among these "standard" candles, says Wang. He notes in a press statement that Type Ia supernovae "may be even more uniform than we thought."

The asymmetry was detected early on, at the time of the supernova's peak brightness. By about a week later, when the outer part of the fireball thinned and allowed astronomers to see deeper inside, they found the innards of the fireball to be spherical. So supernovae measured at this stage may be more reliable as distance indicators. The research, carried out at the European Southern Observatory's Very Large Telescope, appears in the July 10th Astrophysical Journal.

For the first time, astronomers have found hydrogen in a Type Ia's expanding debris. ("Type I" normally means "no hydrogen"; a carbon-oxygen white dwarf has almost none of it.) The amount of hydrogen seen in Supernova 2002ic, which happened in a faint galaxy 950 million light-years away, gives a clue to the companion star that orbited the white dwarf. It was probably an aging giant 3 to 7 times as massive as the Sun that had been emitting an unusually thick stellar wind before the explosion, write Mario Hamuy and colleagues in yesterday's issue of Nature. This was the first direct evidence about the nature of the companion star that fed an exploding white dwarf.