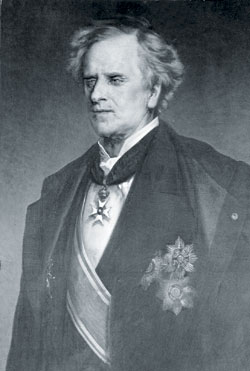 Urbain Jean Joseph Le Verrier (1811–77) accurately calculated the position of an unseen planet based on the motion of Uranus. Using this position, Johann Galle in Germany found Neptune in just a half hour of looking.

Newly discovered documents from the 1840s, suppressed to prevent an international scandal between England and France, are forcing a rewrite of one of the best-known stories in the history of astronomy.

The discovery of the planet Neptune on September 23, 1846, is justly famed as a triumph of reason, hard work, and the brilliant application of celestial mechanics. The French astronomer Urbain Jean Joseph Le Verrier recognized that slight perturbations in the observed motion of Uranus indicated that a new, unknown planet was exerting a gravitational influence. Le Verrier calculated where the planet should be — an extraordinary feat when computing was done with pencil and paper; Johann Galle at Berlin Observatory pointed a telescope at the right spot, and there was Neptune. 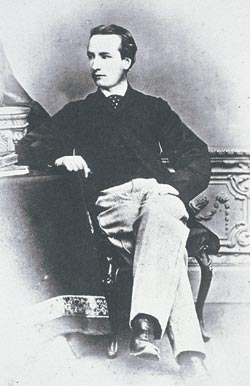 John Couch Adams (1819–92) independently worked on the problem of the planet perturbing Uranus, but his inexact and changing predictions sent Cambridge astronomers on an unsuccessful, six-week wild goose chase.

The tale also goes that John Couch Adams, a young English mathematician at Cambridge, had tackled the same problem independently and predicted the planet's position to within half a degree of Le Verrier's position as early as September 1845. But, according to the story, the English astronomy establishment ignored the young Adams, letting the discovery slip away to the French. After the discovery, a consensus seemed to emerge that both Adams and Le Verrier deserved equal credit for the roles they had played (S&T: September 1996, page 42).

That story, however, conceals a fierce priority dispute that for a while threatened to become a major international incident. Few realized that the consensus story was actually a carefully crafted compromise based on selective use of documents. Only now are hidden papers coming to light that reveal the truth behind the politically expedient version.

According to University of London astronomer Nick Kollerstrom, the selective account, by England's Astronomer Royal George Biddell Airy, was published within two months of Neptune's discovery. However, the Royal Greenwich Observatory's full Neptune file was kept secret from Airy's own time through at least the 1950s. Historians who asked to consult it were told that the file was "unavailable." Then it seemed to disappear altogether.

In recent times suspicion fell on astronomer Olin J. Eggen, who often denied having the file. However, after Eggen's death in 1998, it was noticed by a Lick Observatory graduate student among his effects in Chile. The file has now been returned to the Royal Greenwich Observatory archives at Cambridge, and Kollerstrom is studying its contents, including hundreds of letters.

So far, Kollerstrom has verified many details of the standard version, including Adams's unsuccessful attempts to visit Airy at Greenwich in the fall of 1845. However, in contrast to the traditional story of Adams's wonderful prediction that went shamefully ignored by British astronomers, the real Adams appears to have been rather vague, and his predictions for the planet kept changing. At no point did he have the confidence to say, in effect, as Le Verrier did, "point your telescope here and you will find it." Instead, Adams's predictions ranged over as much as 20° of sky, throwing British searchers at the Cambridge University Observatory on a six-week wild goose chase hunting the planet during the summer of 1846.

The actual discovery of Neptune took Galle just a half hour at the telescope in Berlin (the planet was only 1° from Le Verrier's predicted position). Afterward the British — and especially Airy — got together a carefully digested and heavily selected version of events. Adams's vacillation and mathematical scrupulosity were hushed up and covered over, and only his early, preliminary result — which proved to be more accurate than his later ones — was made public.

The result was a remarkable British takeover. Adams did deserve some recognition for his mathematical investigations, but Kollerstrom believes that "what he ended up with was much more than was due to him."

Le Verrier protested at the time, but in vain. He never had an opportunity to read all the documents in the possession of the British, so he was forced to accept their version of Adams's priority in the calculations. Le Verrier did receive many honors for his work and was later named director of Paris Observatory; but, says Kollerstrom, "I think he was personally traumatized by what had happened, and he ended up as a complete ogre and despot in later years." Eventually his staff rose up in revolt and overthrew him (though he was reappointed after his successor drowned).

In addition to reviewing the Royal Greenwich Observatory file, Kollerstrom has also made the first careful study of French correspondence pertaining to the discovery of Neptune. He hopes to publish the entire Neptune correspondence, from both sides of the Channel, at the end of this year. Then historians and readers can judge for themselves whether justice was meted out the first time the matter was considered.