Seeing Exoplanets in a New Light

Researchers have devised a way to peek at the atmospheres of non-transiting exoplanets. The method may prove to be a valuable tool in astronomers' efforts to characterize planets outside our solar system.

Imagine you’re standing at night on top of the Empire State Building, hoping to see a pea-sized pebble near a light bulb 3,000 miles away in Los Angeles (assuming you could see around the Earth). Could you analyze what minerals are in the pebble? Measure its average density? 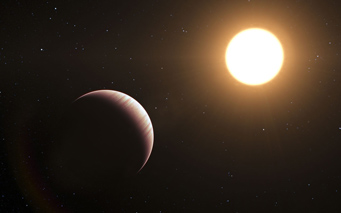 This artist's impression depicts Tau BoÃ¶tis b orbiting its host star. Astronomers have found carbon monoxide in the planet's atmosphere — the first time scientists have been able to characterize the atmosphere of a non-transiting exoplanet.

This is something like the challenges that exoplanet astronomers face. Planets of other stars are fantastically far and faint, and they’re all but lost in the overwhelming blaze of their host stars. But astronomers have teased together various ways to do it, and a team of researchers at Leiden University in the Netherlands has just worked out another.

If an exoplanet transits across the face of its star as seen from our viewpoint, astronomers can try to deduce the composition of its atmosphere by picking out the extremely tiny fraction of the star’s light that skims through the planet’s upper atmosphere. This can sometimes be done — barely — by subtracting the star’s light as seen before a transit from the star’s light during a transit. The trace of light making up the difference should contain a spectroscopic imprint of compounds in the planet's atmosphere.

But this method obviously only works for the small fraction of exoplanets that transit their stars. Atmospheres of planets that don't transit have been unreadable.

However, if a planet orbits very close to the star, its dayside will be so brilliantly illuminated and heated that it may be detected directly. This has been done for a few giant “hot Jupiters.” Now the Leiden scientists say they have gone further. They recently extracted a spectrum of the infrared heat glow of a hot super-Jupiter — well enough to detect carbon monoxide in its atmosphere. This is a first for a non-transiting exoplanet.

The world the scientists observed is Tau Boötis b, which closely orbits the dim naked-eye star Tau Boötis 51 light-years away in the summer sky. The planet circles the star once every 3.3 days at a distance just one-seventh Mercury's separation from the Sun, where it is roasted to around 1,500° C.

Alone, the discovery isn't Earth-shattering, but it demonstrates that it's possible to gather information about non-transiting planets' atmospheres, opening up a window onto the atmospheres of exoplanets that couldn’t be studied before. 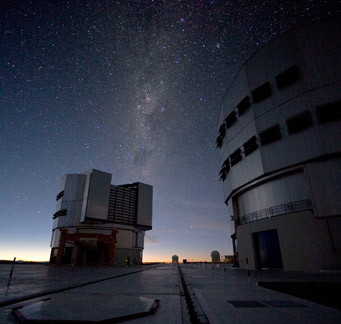 Scientists used the ESO's Very Large Telescope to find carbon monoxide in Tau BoÃ¶tis b's atmosphere. Even larger scopes will be necessary to find other compounds.

The researchers looked for carbon monoxide because it imposes a strong spectroscopic footprint at an opportune infrared wavelength. But study co-author Ignas Snellen (Leiden University) says that it should be possible to use the method to find other compounds too. The team is already on the hunt for methane and water vapor in Tau Boötis b's atmosphere.

Viable planets for this method must orbit their stars closely enough to be heated to glow strongly in the near infrared. And giant planets are at least 100 times more detectable than Earth-sized bodies would be. The scientists already have a handful of other potential targets in mind, though seeing compounds with less distinct footprints than carbon monoxide will require the bigger eyes of the largest telescopes, whose valuable observing time isn't easy to come by.

The Leiden team initially demonstrated their method two years ago on a transiting planet. That success won them three nights' use of one of the European Southern Observatory's 8.2-meter Very Large Telescope reflectors for their effort on Tau Boötis b. Snellen hopes that this work, released in this week's Nature, will someday earn the team time on the planned 39-meter European Extremely Large Telescope, which was recently green-lit for construction and could begin observations as early as 2022.

My observation - past figures for its mass indicated 3.9 M_Jup for this exoplanet but the new method discloses 6 M_Jup. This new method could indicate a number of hot jupiters and other exoplanets, their masses are higher than commonly reported.

My observation - previous mass estimates for this exoplanet indicated 3.9 M_Jup. The method in this report indicates Tau Bootis b is 6 M_Jup. This new method could indicate a number of hot jupiters and perhaps other exoplanets, their masses are higher than commonly reported.