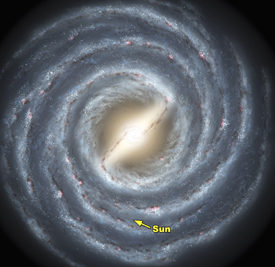 The Milky Way's central bar is more angled away from the Sun and much longer than previously thought, according to data from the Spitzer Space Telescope.

When astronomers try to determine the shape of our galaxy, they don't see a giant spiral disk elegantly wrapping its arms around a central glowing bulge — they just see lots of stars in all directions. Given our less-than-advantageous location within the galactic disk, the only way to derive the galaxy's shape is to reconstruct the Milky Way from the inside out.

Astronomers have previously noted that the mass of stars near the galactic center appear fatter on the northernmost side. Observations have since concluded that our galaxy has a central bar. Following a recent examination of our galaxy's interior, it seems that the Milky Way's backbone is longer than we thought.

Paying close attention to how certain types of stars are grouped together, a team lead by Robert Benjamin (University of Wisconsin-Whitewater) reviewed the Spitzer Space Telescope's infrared star catalog, the Galactic Legacy Mid-Plane Survey Extraordinaire (GLIMPSE). Designed to study the interior configuration of our home galaxy, GLIMPSE lists nearly 30 million stars in the galactic plane. "What we noticed is one half of the galactic center [contains] 25 percent more stars then the other half," says Ed Churchwell (University of Wisconsin-Madison), coauthor of the team's upcoming paper in Astrophysical Journal Letters.

Spitzer's infrared camera sorted out the older red carbon stars (M giants and late K stars) that shine brightly in the infrared starlight from the opaque glow of countless stars near the galaxy's core. "Once you know what kind of stars populate the bar," says Churchwell, "the shape just jumps out at you."

By knowing the shape and orientation of the long stellar bar jutting through the Milky Way's center and by using other barred-spiral galaxies as examples, scientists can create an artistic rendering of what our galaxy should look like. "Barred spirals look as if their arms originate from the tip of the bar — this should be the case for the Milky Way," says Churchwell, who helped Spitzer Science Center illustrator Robert Hurt draft the pictorial view of our galaxy shown above. The new results imply that the bar is a thin strip of stars spanning roughly 29,000 light-years in length and oriented 45° to the line that connects the Sun and the galactic center (about 28,000 light-years away). The bar is more than one-fourth the diameter of the galactic disk, which is approximately 100,000 light years across. Astronomers previously believed the bar was only about 15,000 light-years long.

"The bar appears a little longer than we thought and this is pretty important for star formation," says Churchwell. The longer bar may help explain how material is transported into the galactic center, where it can induce star formation. This idea could solve a problem in galactic dynamics: how do clusters of massive stars form in the chaotic central bulge — an unlikely place for a fairly new population of stars. "There are strong tidal forces at work in the galactic center," says Churchwell. "How did this material get in there, and how did it condense into stars?" The stability of a narrow bar as a long-term feature of the galaxy will help astronomers understand the dynamics that allow for this to happen.