South Pole astronomers have detected a pattern in the afterglow of the Big Bang, called lensed B-modes, that might help reveal inflation's signature. 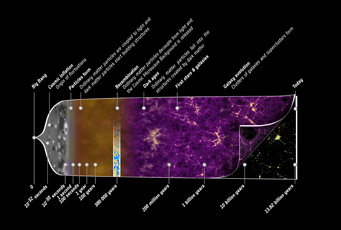 The 13.8-billion year-chronology of our universe from the Big Bang to today, in broadest outline. Click on the image to see it full-size.

In a tiny fraction of a second, an outburst of energy propelled our universe from a hot, dense point to cosmic size. This theoretical outburst, called inflation, provides a fantastically accurate explanation of why the cosmos is the way it is. Among other things, it predicts the pattern of temperature blotches astronomers observe in their earliest view of the cosmos, the cosmic microwave background (CMB). But there’s still no conclusive evidence that inflation happened. 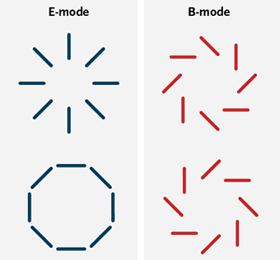 E-mode polarization patterns look like asterisks or loops, and they don't change when mirror-imaged. B-modes, on the other hand, curl either clockwise or counterclockwise into spiral patterns.

Now, a team of astronomers using the South Pole Telescope (SPT) in Antarctica has detected a pattern in the CMB that might help reveal inflation’s signature. But it will be tough to untangle completely.

The discovered signals are called B-modes, and they’re one of two main patterns of polarization predicted to exist in the CMB. Polarization describes a light wave that prefers to vibrate in a particular orientation rather than randomly. On a map of the CMB, you can use a line segment to mark the direction in which the waves oscillate. When you look at the map as a whole, these lines create collective patterns, called E-modes and B-modes. E-modes look like symmetric asterisks or loops, while B-modes curl clockwise or counterclockwise in spiral patterns.

If inflation really did happen, the turmoil within it would have created signature ripples in spacetime called gravitational waves. These waves should have imprinted E-modes and B-modes into the CMB. But these patterns can also be created in other ways. E-modes also arise due to density fluctuations in the early universe — the same fluctuations that created the temperature blotches in the CMB. And to make matters even more complicated, E-modes can be distorted to look like B-modes. 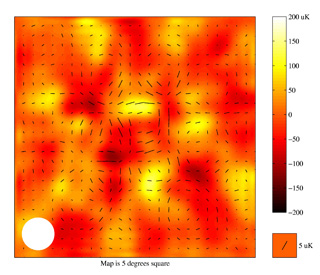 This polarization map shows the first E-modes detected in 2002 by the Degree Angular Scale Interferometer (DASI) telescope. This false-color image shows the temperature variations (yellow is hot, red is cold) in the CMB's radiation. The lines mark the polarization at each spot in the image; the length of the line shows the polarization strength while the orientation shows the direction.

Scientists have already found E-modes in the CMB, but until now they haven’t confirmed that any B-modes exist.

Duncan Hanson (McGill University) and his collaborators spotted signals from the transformed B-modes using data from the 10-meter South Pole Telescope, which measures radiation at millimeter wavelengths. It's sensitive enough to measure very weak patterns in the CMB. These B-modes were originally E-modes that transformed as light from the early universe journeyed to our detectors, passing giant galaxy clusters with enough gravity to bend its path, just as a lens does.

Deciphering these “lensed B-modes” is tricky because the CMB polarization maps largely look like noise rather than distinct patterns. To resolve the maps in more detail, the team made predictions for what the patterns of lensed B-modes should look like: using maps of the universe’s matter distribution, based on infrared observations by the ESA’s (now retired) Herschel spacecraft, they estimated how much gravity should have distorted the E-modes. Once they had an idea of what shapes to look for in their data, they could more easily pick out the lensed B-modes.

“Our method…is sort of like holding up a planisphere when looking for the constellations – it's a lot easier to recognize what you're looking at when you can place it next to a high fidelity template,” adds Duncan Hanson.

“There’s been a longstanding fear that galactic foregrounds (which produce both E- and B-mode polarization fields) would be so bright as to swamp the B-modes or contaminate measurements,” says study coauthor Keith Vanderlinde (University of Toronto). Comparing the data against the infrared-based maps is a clean way of getting around that. 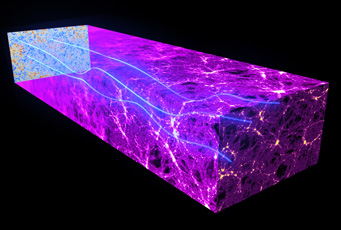 This illustration shows how the paths of photons from the early universe are deflected by the gravity of all the matter they cross on the way to our detectors. A typical photon is deflected by 3 arcminutes due to lensing.

Because lensed B-modes are a distortion of the original inflation signal and don't come directly from the universe's first instants, the newly detected signal is only one piece of a larger puzzle. Cosmologists are eagerly hunting for the so-called primordial B-modes because, unlike E-modes, they would only be created by the spacetime ripples that inflation set going. Finding their imprints would be a direct measurement of the energy stored in space at the moment of inflation.

Primordial B-modes will be fainter than both the E-modes and lensed B-modes, requiring intense data analysis to reveal them. But this recent discovery will make this work easier, because it tells astronomers which signals they can eliminate from their observations as noise. They can also use lensed B-modes to map out the distribution of matter in the universe.

The description of E and B polarization appears to me to be completely analogous to the early geophysics work of Lord Rayleigh (1842-1919) and Sir Horace Lamb (1849-1935), names which come to my mind. Their work was based on the work of Sir Isaac Newton (1643-1727). Of course there were many others all over the world who corresponded via written notes carried onboard sailing vessels and laid the groundwork for the present knowledge of Mother Earth, namely that she is dynamic, is multilayered and has an iron core, for starts. In their work they established that energy travels in the form of pressure and torsional (shear, rotational etc.) waves on the earth Each form has a distinct velocity and attenuation characteristic, depending on the medium. They never saw the core or the mantel or the crusts but enabled later researchers to exactly identify the materials which defined them.

It appears to me that we are at the same point in time for discovery in the knowledge of the universe. Let's face it, we are 13.82+ billion years old, the Creation continues, governed by the Laws of Physics. These are exciting times.

First and formost I want to let you know that through the years I have enjoy your magasine it is so well done and instrumental in my owne astronomical education so I want to thank you for all these wonder full years.

I just want to let you know that I'm still receiving the weekly bulletin to my old E mail address '' carmanahdesign.com''

Thank you and best regards

When they say the universe is "mapped" I assume they know where we are in space time or else we would not be able to read the flow of CMB relative to our position. Is this correct? Are we part of a galaxy emitting this radiation in present time or is ours vastly different? In another 13 Billion years would ours reach an observer in like manner? My last question is, what is our speed relative to the CMB coming from (presumably) far across the universe? In other words, has the Big Bang set us on a departure from the other side at a speed that warps the readings?
I would appreciate a response from a person at S&T with access to people working with CMB.