[email protected] is currently chugging away on at least 540,000 people's computers. The screensaver gives a graphical view of what it's doing each moment.

More than three years after it began, the [email protected] project has announced plans to expand its hunt for radio signals coming from intelligent civilizations among the stars.

[email protected] lets you set up your computer to analyze cosmic radio noise collected by the giant Arecibo dish in Puerto Rico, the world's largest. Whenever your computer is idling in screen-saver mode, a program sifts through chunks of radio data for signs of weak, artificial, narrowband signals. Nearly 4 million people have downloaded the software; 540,000 currently qualify as "active users," having returned at least one packet of processed results in the last four weeks.

[email protected] has been limited to scanning the part of the sky where the 305-meter Arecibo dish can point, the band between declination +2° and +38°. This is about 30 percent of the celestial sphere. The new "[email protected] II" will enlarge the search to the southern half of the sky, a region that includes most of our Milky Way galaxy's enormous volume. The new project will piggyback on the 64-meter Parkes radio telescope in Australia. It will listen wherever radio astronomers happen to point the dish for their own projects.

The biggest advance is that [email protected] II should gather about 10 or 15 times more radio data per day, on average, than now gets recorded at Arecibo (the new system will span a wider frequency range and listen to several spots on the sky at once). This means that at long last, the project will have enough raw data to keep all its volunteers productively busy. Right now there are more than twice as many volunteers as are needed to do the current job; at least half of them are being sent duplicate data as make-work. 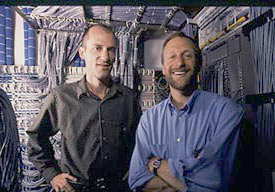 In addition, the [email protected] software and infrastructure, based at the University of California at Berkeley, is being overhauled to create a system called BOINC, the Berkeley Open Infrastructure for Network Computing. This will give people the flexibility to share their idle computer time between [email protected] and other distributed-computing projects, such as those currently under way in molecular biology, climate modeling, and mathematics.

Third is a project called AstroPulse, a new type of analysis to look for extremely brief, wideband pulses in the masses of radio data already archived. Astronomers think microsecond pulses might originate from three possible sources: ETs trying to catch attention, exotic types of pulsars, or evaporating mini- black holes that could conceivably be left over from the Big Bang.

At the same time, says chief project scientist Dan Werthimer, the sensitive Arecibo search is expected to continue. It has several years to go before it will scan most of its sector of the sky enough times to give a reasonably good negative result — one that makes full use of the data that volunteers have already laboriously analyzed. Assuming, of course, that it doesn't turn up an alien signal first.

"All of this is funding-contingent," Werthimer warns. "We actually don't have the money yet" to carry out the southern-sky project or planned upgrades at Arecibo. The Berkeley group expects to raise the money from foundations and wealthy donors; it will hit up its 540,000 active users "as a last resort." If all goes according to plan the new projects should be up and running in early 2003.

For more about [email protected] and all other searches for extraterrestrial intelligence under way around the world, see "SETI Searches Today" in our comprehensive SETI Section.