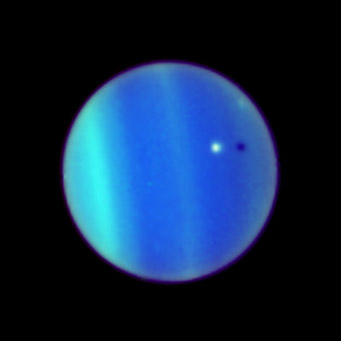 Hubble captures a mischievous moon's shadow suspended above the cloud tops of Uranus.

For the first time in recorded history astronomers witnessed the shadow of one of Uranus's tiny moons travel across the distant planet's cloud tops. Using the sharp vision of the Hubble Space Telescope's Advanced Camera for Surveys, scientists captured the tiny moon Ariel passing in front of the gas giant, casting its shadow briefly upon Uranus's azure-tinted cloud tops.

Due to the extreme tilt of Uranus's spin axis relative to its orbital plane, such events can only occur for short periods every 42 years — when Uranus is nearest the equinoxes during the planet's 84-year orbit around the Sun. In 1965, the last time such an event was visible, telescope technology wasn't advanced enough to resolve it. Currently, only the largest observatories on Earth equipped with the latest adaptive-optics technology — or orbiting observatories such as Hubble — can witness these occurrences with any clarity.