You may think you have a hard job, but imagine this item on your to-do list: saving Earth from nonexistence. It sounds like a task worthy of Superman, but it has fallen instead to computational astrophysicists like Mordecai-Mark Mac Low of the American Museum of Natural History to make sure our planet is spared oblivion — or at least virtual oblivion in numerical simulations. 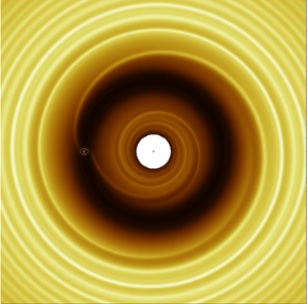 The spiral density waves generated by a simulated proto-Earth in the surrounding simulated gas will eventually spell simulated disaster for our digital counterparts. How did the real Earth avoid the same fate?

Mac Low’s challenge stems from a key mystery in our current picture of how planets are formed. It’s long been thought that Earth coalesced from a gaseous disk swirling around the Sun. Strong support for the idea comes from the numerous examples of disks that have been spotted elsewhere in the Milky Way. Yet the mathematics that describes such systems reveals a disturbing paradox: the gravitational pull of a disk can steal orbital energy away from a planet as it's forming. Instead of maintaining a safe and steady orbit, the equations suggest the young Earth should have been locked in a death spiral that sent it plunging into the Sun.

There is, of course, some compelling evidence to the contrary. "We're still here!" says Mac Low.

Now, together with collaborators Wladimir Lyra and Simje-Jan Paardekooper, Mac Low has apparently found a loophole that allows planets like Earth to survive their origins.

The problem is decades old, but it became a front-burner issue once astronomers began discovering “hot Jupiters” in orbit around other stars. Such planets are massive gas giants like those in the outer solar system. Yet they are in extremely tight orbits that keep them much closer to their stars than Mercury is to our Sun. Since gas giants cannot form naturally in such orbits, they had to have shifted there after forming farther out.

"Classic theory shows that planets can migrate quickly inward," says Mac Low. The question then becomes, how did Earth avoid this fate?

Building on previous work, the team developed a new series of simulations of planet formation that include the subtle effects of temperature and entropy variations within the gas disk. Prior simulations assumed that temperatures fall smoothly with increasing radius from the Sun. But because the midplane of the disk is opaque, says Mac Low, heat cannot be easily radiated away and more abrupt temperature differences can arise. This, in turn, can have a profound effect on how the gas disk pulls on a planet in a particular orbit. It means, he says, "Both the strength and the direction of the planet’s migration can change."

The simplest version of planet migration is based on the fact that massive objects moving within a gas disk — the progenitor of Earth, for example — will generate spiral ripples in the disk that, in turn, pull on the planet. The outward ripple has the larger effect, which drags on the planet, causes it to lose energy, and drop to a lower orbit.

Temperature variations can complicate this picture, particularly when it comes to gas that’s in nearly the same orbital radius as the coalescing planet. Such gas is thought to move in "horseshoe orbits" with respect to the planet, alternately falling behind and moving ahead as it interacts with the planet's gravity. This back and forth motion leads to the compression of gas in some areas. Since gas compressibility depends on temperature, temperature differences play a key role in dictating how the gas influences the planet and, ultimately, where the planet migrates.

The new simulations show that at certain locations within in the disk, the usual inward migration can be stalled or even reversed. In the end, says Mac Low, the planet shifts to an orbit where the forces of inward and outward migration are balanced. The planet is effectively “dropped off” into a stable orbit, where it remains long after the gas disk dissipates and the forces that shaped the planet’s orbit disappear.

The end point of the simulations is a result that looks comfortingly like our kind of solar system. Of course, even more comforting would be if the Kepler mission manages to find several more solar systems like our own in the next few years to verify that our survival is not just a crazy cosmic fluke.

As Andrew Youdin, of the Canadian Institute for Theoretical Astrophysics puts it: “While theory seem to offer unlimited possibilities for planet migration, the hope is that the detection of ever larger numbers of exoplanets — both near and far from their host sars over a range of mass — will impose tighter constraints on the imaginations of theorists.”

On the other hand, if you’re wondering why some solar systems lead to hot Jupiters and some don’t, well . . . perhaps you’d better put the coffee on.

This is an interesting addition to current models, but what happens if Kepler finds only a whole lot more Hot Jupiters?
In such planetary systems, is it still possible for a smallish planet to form after the HJ drifts inward, or does it eat everything else while passing through the Starâs ecosphere? These Hot Jupiters around main-sequence dwarves make me think that maybe they are the only thing within 10 to 20 AU of the star.
Earth is still a rare critter. The process that gave us it and us, has to be the most improbable event possible!
There is also the matter of our own post-accretion history. The Cataclysm that gave us the Moon gave us huge tides in the crust and mantle for some time, which may have been responsible in some way for life to form. Speculation on my part, yes; but say if some other G or K dwarf has an Earth-sized planet in the sweet zone, that doesnât have a large moon like ours. With only a weak stellar tide would it ever come up with life?

Current theory suggests our moon formed through a planet
Mars-size object, a glancing blow at about the 4 billion
year point. I wonder if that was taken into account (probably not) in their analysis; one could easily visualize that that collision angle provided for a more distant orbit then would otherwise have happened.
If so, perhaps every Earth-like exo-planet out there (if any)... requires a planetary collision early on, to survive.
Just some thoughts.

It is well known that condensing stellar nebulae are highly magnetized plasmas. Magnetic energy densities and pressure can play important dynamical roles in controlling the stabilization of planet formation against disrupting forces especially as the central star goes through a T-Tauri stage. I do not know if the model reported here included this physics. An early NASA monograph (#SP-345) by Alfven and Arrhenius discusses the importance of the critical ionization velocity in stabilizing planet formation according to composition. Some of their specific conclusions are now known not to be correct but the relative stabilizing importance of magnetic pressure during planet formation in a contracting stellar plasma still needs to quantified especially if thermal-induced pressure effects are as important as this article suggests.

I did not see in this report if the computer model started out with microscopic dust grains vs. 1 km or larger objects already embedded in a dust disk to make planets. This will make a huge difference in the outcome of planetary formation. Most of the tiny particles will not accrete but rapidly dissipate. Remember too that 38% of the crop of 424 exoplanets orbit <=0.387 AU from their host stars and that crop has an average mass of 1.63 Jupiters. We certainly do not observe this arrangement in our solar system.