Sky & Telescope's August 2012 issue is now available to digital subscribers. Some print subscribers have already received it, and it's officially on-sale at newsstands starting July 3rd. 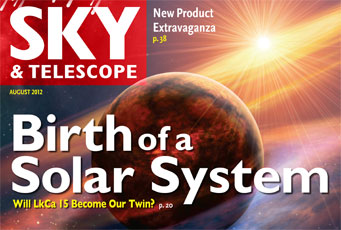 This month’s cover story takes us on a tour of a solar system in utero, astronomically speaking. The star LkCa 15, a young, solar-mass star about 450 light-years away, wears an extended tutu of gas and dust in which a large ring is cut. In this gap astronomers discovered what looks like a forming Jupiter-mass planet, coalescing at about 10 times the Earth-Sun distance from the star.

Astronomers have few shots of newborn planetary systems, and LkCa 15 intrigues them — not only as one of a handful of data points, but because it’s about as old as our solar system was when Jupiter and Saturn formed. With reason to suspect there may be a second large planet coming together in the star’s dusty gas disk, observers wonder if LkCa 15 will end up hosting a family of planets like our Sun’s.

Exoplanet systems are certainly the craze, but the feature that intrigues me most this month is the exposé on famous astronomy quotes never spoken. Think the Apollo 13 astronauts said, “Houston, we have a problem”? Not quite. Even Peter Pan’s original directions weren’t as stellar as Disney made them out to be. From Galileo to Carl Sagan, famous speakers didn’t say what they’re often quoted to have said.

Summer brings fewer night hours but more pleasant weather in which to spend those hours outside. August is known for the Perseid meteor shower, which will peak after midnight between Saturday the 11th and Sunday the 12th. While the Perseids aren’t the richest annual meteor shower (that prize usually goes to the December Geminids), they are often the one most watched.

There’s always lots to see in the sky, but if you’ve ever felt you’ve seen it all, this month’s article by Rod Mollise is for you. Mollise once despaired of observing anything new. Then he took on the challenge of observing every object in the Herschel Catalog, a list of roughly 2,500 objects discovered by brother-sister team William and Caroline Herschel between 1782 and 1802. Mollise talks about some of the notable landmarks on his journey in the article, and you can also read more about his project in his follow-up interview with S&T editor in chief Robert Naeye.

From an astronomical extravaganza of new products to a how-to on photographing rocket launches and everything in between (including a black hole gobbling a star), the August issue has enough fun to keep you entranced long into the summer night.