Sky & Telescope's November 2011 issue is now available to digital subscribers. Some print subscribers have already received it, and it's officially on-sale at newsstands starting October 4th. 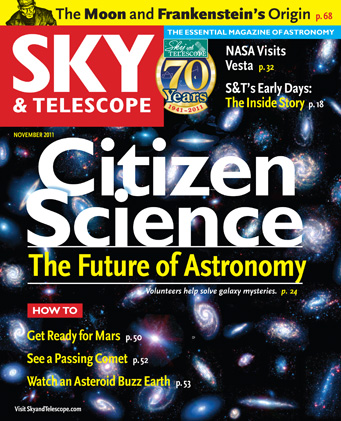 This month's issue includes a detective story involving astronomy and Mary Shelley's classic Frankenstein tale. According to diary entries, Shelley and some of her friends (including Lord Byron) spent the summer of 1816 on the shores of Lake Geneva. We know that in June 1816, the group decided to invent some ghost stories to frighten each other, and that soon after Shelley had a "waking dream" of a scientist creating a living creature. There has been a dispute, though, over whether Shelley really had this dream or whether she invented the tale to sell copies of her book. To resolve the issue, Don Olson and a team of researchers and students traveled to Switzerland last December to see whether they could use astronomical clues in Shelley's diary to verify her account. You'll have to read the article to learn what they uncovered!

I also enjoyed reading about the origins of Galaxy Zoo. Kevin Schawinski tells the story of how he and a friend came up with the idea in on Oxford pub while thinking of ways to sift through huge amounts of galaxy photos. Crowdsourcing in astronomy has exploded – think of Planet Hunters and Moon Zoo – but I never knew how it all began.

There's a great story about NASA's Dawn spacecraft achieving orbit around Vesta, a large asteroid between Mars and Jupiter. Dawn's onboard camera has already snapped photos of gigantic craters, weird stripes, and a structure that looks like a snowman. Dawn is the first spacecraft to orbit a main-belt asteroid, and I'm excited to see the wonders in store as it swoops low over this huge rock.

And of course there's the usual complement of wonderful observing guides. In addition to the usual Deep-Sky Wonders and Going Deep columns, there's coverage of three timely events: the approaching opposition of Mars, the remarkable Comet Garradd, and the closest-ever observable approach to Earth of a 400-meter chunk of rock (asteroid 2005 YU55). Plus a review of an important new solar scope.

That's just a taste of the riches in the November 2011 issue. To find out more, read our online Table of Contents.