The hole nicknamed Annie (at center) is about twice the length of a football field. The THEMIS camera on NASA's Mars Odyssey orbiter took all three images, revealing that the hole is cooler than surrounding surface in the afternoon and warmer than the surrounding surface at night.

As described in a NASA press release, the orbiting Mars Odyssey spacecraft has discovered entrances to seven possible caves high on the slopes of the Martian volcano Arsia Mons. The find is fueling interest in potential underground habitats and sparking searches for caverns elsewhere on the Red Planet.

Evidence that the dark pits are very deep comes from thermal measurements taken by Odyssey's THEMIS (Thermal Emission Imaging System) camera, which measures heat in the form of mid-infrared emissions. The insides of the holes stay cooler than the surrounding surface during the day and warmer at night, like caves on Earth, though given Mars's very thin atmosphere, the behavior isn't as consistent.

Team member Philip Christensen (Arizona State University) tells us, "The best way to explain these temperature differences is to have a deep hole with vertical walls, so you're looking at a rocky surface free from sand and dust." 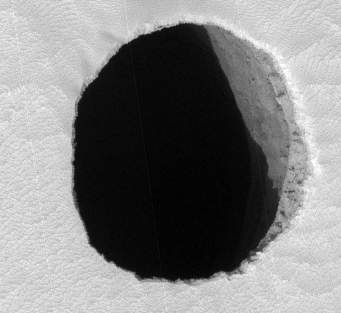 Slanting sunlight strikes what appears to be a near-vertical wall in this pit. The depths remain in shadow. Click for a larger image.

Close-ups taken by the Mars Reconnaissance Orbiter's HiRISE camera reveal nearly straight walls descending into shadowed depths. While these "windows into Mars" may offer tantalizing glimpses deeper into the Martian past, they are probably poor candidates for locating potential microbial life inside the planet, due to their high altitudes.

The origin of these caverns is presumably volcanic. Several of them appear in line with strings of bowl-shaped pits where the surface has collapsed into old lava tubes on Arsia Mons's flanks.

Martian caves are interesting not only for their geology but as possible habitats for future human colonists. Their interiors would be out of the Martian winds and shielded from the harmful cosmic radiation that bathes the surface. 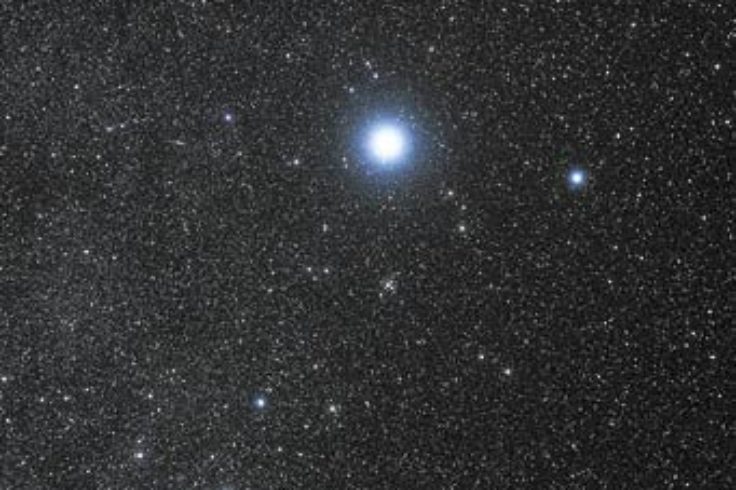