A glitch has struck the Yutu rover.

The Sun recently set on Sinus Iridum, landing site of China’s third lunar mission. The sunset kicks off two weeks of lunar night, during which the solar-powered Chang’e 3 lander and rover are supposed to hibernate. This is the second lunar night Chang’e 3 has experienced. The lander’s main color camera didn’t survive the first. Now, while preparing for bed for the second night, something went wrong with the 120-kg (260-pound) Yutu rover. 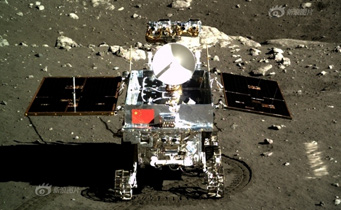 The English-language news outlet Xinhua reported on January 25th that the rover had experienced “a mechanical control abnormality, and scientists are organizing repairs.” This abnormality was caused by the complex and harsh lunar surface environment, according to a statement from China’s State Administration of Science, Technology, and Industry for National Defense (SASTIND).

To survive the night’s bitterly cold temperatures (dropping as low as -180° Celsius, or -290° F), Yutu is supposed to carefully hunker down. Its color camera and high-gain antenna are attached to a central mast, which folds down against the rover’s body. Once that is secured, one solar panel folds over the instruments like a blanket, tucking the equipment in with a radioisotopic heater against the frigid night. The rover points the other solar panel towards the horizon to catch rays from the Sun when it rises again.

While reports are vague, it sounds like some part of the origami sequence malfunctioned before Yutu went into full hibernation. Depending on what exactly happened, this glitch could be fatal to Yutu. The team probably won't confirm the rover’s fate until the Sun rises on Sinus Iridum in about a week and a half. For now, both the rover and lander — which successfully entered hibernation — are dormant.

Even if the rover has failed, it has about 40 days of work under its belt and has logged more than 100 meters (300-plus feet) across the Moon’s surface, following its successful landing in December.

The robotic mission also returned great panoramas of the lunar surface and the first views of Earth from the Moon in more than 30 years, pictured below. 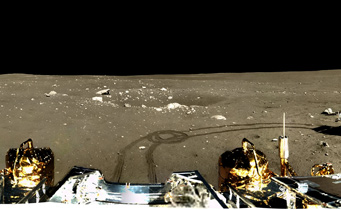 This is a portion of the panoramic view around the Chang'e 3 lander captured on December 20, 2013. 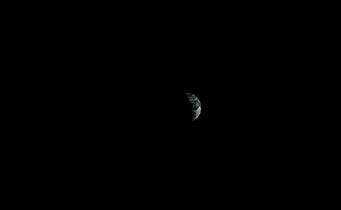 The Chang'e 3 lunar lander captured this photo of Earth from the lunar surface on December 24 at 18:15 UTC. Click for larger image.

Poignant messages written in the rover’s voice have appeared on social media and in news coverage. Our favorite is the sign-off message in one blog (based on Google translate): “Goodnight Earth. Goodnight humanity.”

We’ll have to see whether Mark Twain’s famous line comes back to prove these farewells premature.

A minor detail: the article mentions Sinus Iridum twice. While the landing was targeted for Sinus Iridum, in fact the spacecraft landed well to the east, outside any reasonable definition of the limits of Sinus Iridum. It's about halfway between the crater "Le Verrier" and the island of mountains known as the "Straight Range". There's no common name for this region to the east of Sinus Iridum. Both the actual landing site and the planned landing site are on the northern fringe of Mare Imbrium.

Doug, your racist stereotype, fuzzy grammar, and misspelling reflect poorly on the readership of Sky and Telescope. This mission has already been a great success. Every nation that has sent probes to the Moon and other planets, including the US and USSR, has experienced equipment failures. I hope this little rover will survive the lunar night, and whether it does or not, we can be sure that China will be back on the Moon again. I hope that soon all the spacefaring nations will start collaborating.

I don't think Doug was being racist at all. Chinese manufacturing is well known for being substandard, because most Chinese companies choose to compete on price, not quality. Doug was merely being funny by referencing this fact in regards to the rover.

His comment was akin to saying "Mexicans are infamous about making food spicy", if this article had been about a Mexican restaurant failing to make a traditionally non-spicy dish not spicy.

It sucks when you have to explain a joke. Takes the funny out of it...

As an avid lunar observer I appreciated Doug's clarification on the actual landing site. It is a great achievement for China. Let's hope the rover comes back to life after the long lunar week.

Mike N, you wrote: "I appreciated Doug's clarification on the actual landing site." I sure don't want to be confused with "Doug" so I have to say it: that wasn't Doug who clarified the landing site; that was me. And I'm very glad you liked it. ...... As for Doug's childish comment about the quality of Chinese manufacturing and also Cody's puffed-up defense of that childish comment, you're both proving that some Chinese stereotypes about "paranoid ignorant westerners" may have a grain of truth to them. This small Chinese rover is a tremendous accomplishment, but let's keep it in perspective. The Chinese space program is, very slowly, checking off the boxes on a list of basic space science missions which the US and the former USSR completed decades ago. It's great fun to watch. Relax and enjoy the show! [contact: Frank-at-ReedNavigation-dot-com].

Hah! I was essentially going to say what Frank just said....
Doug's comment *was* racist whether it was funny or not.
Sure hope the craft survives. It's difficult to even fathom the ingenuity, effort, and coordination to accomplish what this mission has already accomplished. I love living vicariously through robots.

Call me a racist if you like but Chinese civilization is a great one and this is befitting. Can hardly wait them going for mars. One complaint, hope the society finds within it to open up, else it would be such a waste.

Please return product and original receipt and replacement will be shipped if we confirm there is malfunction in unit.

While it is good so see other nations moving ahead in space, ( someone needs to push the U.S ahead in space, we seem unable to do it ourselves lately) the Chinese space program is controlled by its military. The Chinese are well known for "taking" as much technology as they can. I do not trust their intentions due to the military aspect of the program. I am not sure if the U.S. should work with the Chinese on space projects just yet. I am not against it at this time but it is good to see their success so far. Might be a good idea so send a takonaut? from China to the ISS and in turn send a ISS astronaut to the Chinese station at some point.

US federal law explicitly prohibits NASA from collaborating with China on space missions. Here's a thorough and timely article by Leonard David on space.com: http://www.space.com/23965-china-moon-rover-landing-cooperation.html