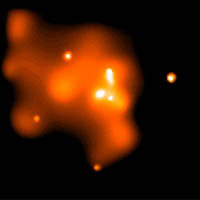 An X-ray view of the Milky Way's innermost 10 light-years,imaged by the Chandra X-ray Observatory. Sagittarius A* is the brightest(leftmost) of the three sources near center. Its rapid variations have confirmed its tiny size.

All galaxies that have central bulges are now believed
to have black holes at their cores, our Milky Way included. Indeed,
a very dark mass weighing about 2.6 million Suns lies at the Milky
Way's exact center, revealing itself by its gravitational effects
on surroundings stars. A supermassive black hole is the obvious candidate.

But it's not the only possible candidate. Some astronomers
have considered what else might fit the evidence. A massive cluster
of dark stars could conceivably do, or maybe a pool of neutrinos,
or a gathering of some even more exotic kind of dark matter.

One puzzle that has prompted such speculation is the
object's curious darkness and silence, compared to the wildly energetic
turmoil surrounding the central black holes in many galaxies. The
object's position is marked only by the weak radio source Sagittarius
A* ("A-star") and a feeble X-ray glow discovered by the Chandra X-Ray
Observatory in 1999. If it's a black hole, it's either consuming surprisingly
little matter considering the richness of the stuff in the galaxy's
center, or it's swallowing matter so efficiently that hardly a burp
of energy escapes from vanishing down the hole.

Now all such alternative theories can be tossed out
the window, announce Frederick Baganoff (MIT) and 10 colleagues in
today's issue of Nature. It's a black hole after all.

The smoking gun turned up in a new Chandra observation.
The supersensitive satellite found X-rays from Sagittarius A* varying
drastically in as little as 10 minutes. In that short a time, light
(and X-rays) travels hardly more than 150 million kilometers, the
distance from the Earth to the Sun (1 astronomical unit). Therefore
the X-ray source can't be much larger than that. According to general
relativity, anything that small with 2.6 million solar masses must
quickly collapse to become a black hole.