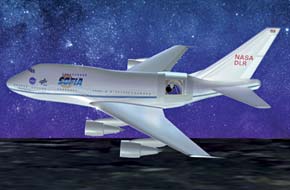 This artist's concept shows the Stratospheric Observatory for Infrared Astronomy (SOFIA) flying at 12,500 meters (41,000 feet). At this altitude, SOFIA's 2.5-meter-wide telescope is above more than 99% of the atmospheric water vapor that blocks cosmic infrared signals from reaching the ground.

NASA has saved an airborne infrared observatory from cancellation. Originally zeroed out in next year’s NASA budget, an agency review has concluded that the NASA/German Stratospheric Observatory for Infrared Astronomy (SOFIA) should proceed to completion, with science flights starting as early as 2008. SOFIA is a modified Boeing 747 airliner with a 2.5-meter (98-inch) telescope poking out a hole in its side. 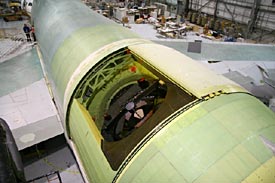 Nearing completion in a hanger in Waco, Texas, the modified 747 that will soon take flight as the Stratospheric Observatory for Infrared Astronomy (SOFIA) sits with its telescope-cavity door open.

SOFIA was an obvious target in NASA’s budget crunch because the project was years behind schedule and millions of dollars over budget, partially because qualifying the aircraft for flight turned out to be more difficult than expected. The mission was saved because of effective lobbying from Germany, and perhaps more important, an independent review that convinced NASA officials that SOFIA’s technical problems were essentially behind it.

NASA’s Wide-field Infrared Survey Explorer (WISE) will move forward as well. Astronomers were concerned that WISE would be sacrificed to restore SOFIA. Instead SIM PlanetQuest, part of NASA's effort to find planets around other stars, will be postponed until astronomers can reconsider its importance relative to other space-astronomy missions on their wish list in a time of ever scarcer resources.