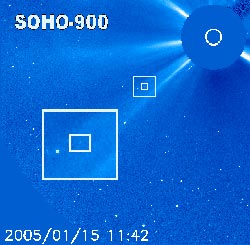 SOHO Comet No. 900 appears as a tiny, very faint speck (inside the smaller set of boxes) in this image captured by the spacecraft's LASCO C3 coronagraph. The region is shown magnified in the larger set of boxes. The white circle indicates the outline of the Sun, which is masked by an occulting disk. Note the coronal streamers radiating from the Sun.

On January 15th, just seven months after the 800th comet was found in images obtained by the SOHO (Solar and Heliospheric Observatory) spacecraft, SOHO No. 900 was discovered by a German amateur astronomer.

Rainer Kracht detected the object in images taken with one of the spacecraft's LASCO coronagraphs. Kracht downloaded the observations from the LASCO Web site. The new interloper turned out to be a member of the Kreutz family of "sungrazing" comets, which usually get vaporized during their close encounters with the Sun. To date, Kracht has discovered 138 SOHO comets, including SOHO No. 500 on August 12, 2002. He details his discoveries on his Web site.

Launched in 1995, SOHO is operated by NASA and the European Space Agency. Although its primary mission is to continuously monitor the Sun's activity, it has now become the most prolific comet "discoverer" in history. Kracht is one of a growing number of successful SOHO comet hunters worldwide who regularly scan LASCO images, which are posted in near-real time on the Internet. To join in the search, visit http://ares.nrl.navy.mil/sungrazer/. 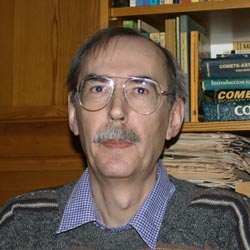 In the meantime, the SOHO project has established a Web-based contest to celebrate the spacecraft's 1,000th comet sighting, which is expected to come sometime this summer or early fall. Participants are asked to guess the date and time SOHO No. 1000 will reach perihelion. The three closest entries will win assorted SOHO products.