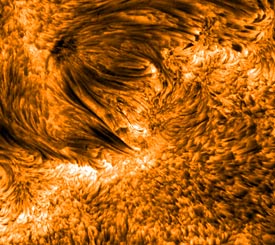 Upward jets of gas appear as a 'lawn' of short, dark spicules on the right side of this false-color image, taken in red hydrogen-alpha light on June 16, 2003. This wavelength shows detail in the chromosphere, the lower atmosphere silhouetted on the Sun's bright surface below. Visible at upper left are large fibrils, or magnetic loops. This picture was captured using the 1-meter Swedish Solar Telescope, which uses a shape-changing mirror to correct for blurring due to Earth's atmosphere.

They look like little whiskers on the Sun's face when seen through a telescope, but the jets of solar gas known as spicules are thousands of kilometers long and shoot material up from the Sun's surface at 20 kilometers per second. They are transient — each one lives just a few minutes before disappearing — but more than 100,000 of them cover the Sun's surface at any moment. Solar physicists have struggled to explain spicules since they were discovered in 1877. Now a new theory based on some of the sharpest-ever images of the Sun may finally provide the answer.

According to the new theory developed by Bart De Pontieu (Lockheed Martin Solar and Astrophysics Lab) and his collaborators, the spicules are intimately related to the slight pulsations of the Sun's visible surface (photosphere) caused by giant sound waves called p-modes ricocheting in its interior. The p-modes are normally trapped near the photosphere, but they can leak into the atmosphere above with the help of strong magnetic-field structures called magnetic flux tubes. 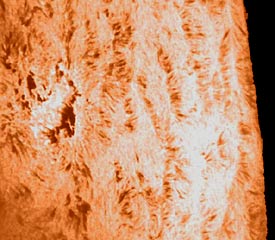 Spicules shoot into space in this H-alpha image of the solar chromosphere. These jet-like features persist for only a few minutes, but they eject material at speeds of 20 to 30 kilometers per second.

A video captured by the researchers using the 1-meter Swedish Solar Telescope (SST) shows spicules flickering above the photosphere. The telescope captures features as small as 70 km across on the Sun, using a shape-changing mirror that corrects blurring caused by Earth's atmosphere. 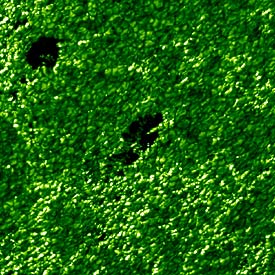 Taken at the same time as the hydrogen-alpha image, this false-color image taken with a blue filter shows the photosphere, or visible surface, of the Sun. The scaly appearance is due to the presence of 'granules,' 1,000-km-wide patches of gas that constantly well up as a result of convection currents. According to the new spicule theory, these granules provide some of the upward kick that gives rise to spicules, (the rest being due to p-modes).

Using their new theory, the researchers have built a computer model that can predict where and when spicules will form based on the location of the magnetic flux tubes and timing of the sound waves. The model's minute-by-minute predictions for specific locations on the Sun's visible surface match up well with recent data obtained with the orbiting Solar and Heliospheric Observatory and the SST.