On Monday the crew of Space Shuttle Atlantis successfully carried out their fifth and final spacewalk of the difficult mission to service the Hubble Space Telescope, 350 miles above Earth’s surface. Today, they answered questions from reporters on the ground about what the job had been like. They will return to Earth on Friday, May 22nd. 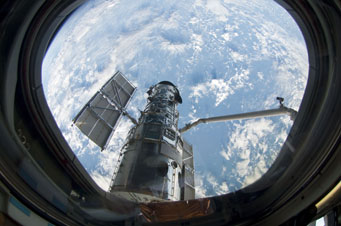 The Hubble Space Telescope floats over the ocean, as seen from the space shuttle Atlantis this week.

Although the astronauts completed all the scheduled repairs and upgrades, including those termed “optional” if time or other constraints got in the way, the jobs didn’t always go according to plan. There was a handrail that had to be pried off by force and a stuck bolt that nearly prevented the swap-out of the 15-year-old WFPC 2 camera for its better, $135 million replacement. But the task that was supposed to be hardest, delicate repairs to the Advanced Camera for Surveys, which was not designed to allow such work, turned out to be the easiest of all.

The astronauts had rehearsed every move for years, including with robots that might have attempted the repairs if humans had not gone up. But robotic repairs proved impossible; the jobs were too complicated and likely to require too much moment-by-moment judgment. Even when things worked just as they had practiced on the ground, the astronauts praised the crew at the Goddard Space Flight Center in Maryland for help in working them through each bit of the way. 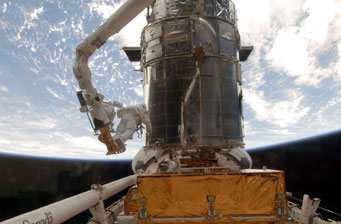 An astronaut working on the Hubble Space Telescope this week

The achievement will give the Hubble not just a longer lifespan — 5 or perhaps even 10 more productive years — but increased its capabilities as well. And it will eventually have an orderly death. The astronauts added a remotely-operable spacecraft dock so that a small rocket can push Hubble back into the atmosphere for safe destruction at the end of its lifespan.

President Obama is scheduled to talk with the crew on Thursday. When asked about the meeting, astronaut’s responses were all in favor of exploration and the importance of manned missions. The space shuttle program has been NASA’s only way to get astronauts into orbit since 1980, but it will be abandoned after eight more flights. NASA’s Constellation rocket program, designed to take the shuttles’ place, won’t start flying until around 2015. Nevertheless the astronauts enthusiastically endorsed sending not just machines but people to explore the solar system. “As much as we love low earth orbit,” said John Grunsfeld, “it's time to leave orbit. Time for humans to start moving out and explore the cosmos.”

Each expressed awe at docking with Hubble, and especially at watching it float away knowing that it will never be touched again. Astronaut Megan McArthur, the only female on the flight, said she stood in "awe at the human ingenuity in creating such a thing." After completing the final repairs, colleagues John Grunsfeld and Andrew Feustel gave Hubble “one last hug.” “It lived up to all our expectations,” they said. “We did it, but I'm still impressed that we did it.”

Valerie Daum is an intern at Sky and Telescope

Sirs: NASAs plan to plunge Hubble in a controlled crash makes me think that a better idea would be to turn it around and send it into deep space to enjoy, for it's own eternity, the views it has given us for these past years. But if I know NASA, it will have a half dozen excuses why it's "to dangerous".

This mission has been a truly historic event. And, I have the greatest admiration for the astronauts who accomplished the task given to them. They were able to overcome every hurdle thrown at them and deserve all of our praise. Thanks to their efforts and those of the crew at the Goddard Space Flight Center, we now have, in essence, a brand new telescope more powerful and better than ever before. This is indeed a time to rejoice! Bravo!

Great ! Its a wonderful job performed by great skill in the space.we can not manage our car on roads but the scientist in the world performs tasks so easily that we wonder how they do.Kudos to all of them.
Anant Ashtekar (India)

I'd like to see the actual Hubble spacecraft brought back and placed in the Smithsonian. This particular craft has had years to develop our views of the Universe in the most basic way (for us): by allowing us to see. It's effects have reached far and wide on our planet, and probably influenced the minds of more people than any other craft, except for those that took men to the moon. We should at least consider this possibility.

Joe T, Guillermo N. -- I like both your ideas, but alas, I don't see how either of them could be carried out. The thrust-over-time combinations required would be both tremendously destructive and impractically huge. Basically, to get from circular, near-Earth orbit to escape takes as much energy as getting from ground to orbit, so energetically, it's parked halfway between ground and infinity.

At launch this transition was safely possible only by having everything in a 'stowed-away-and-latched-down' mode. Avoiding burn-up on re-entry would require either an impossibly large shield, or an impossibly huge rocket to control such a descent, neither of which could be brought up to it by the Shuttle. Pushing it out to escape from Earth's gravity would take a big boost, requiring some serious rockets. Getting it out of the Sun's gravity takes, by my rough calculation, about 15 times that much energy. This is neither "too dangerous" nor "an excuse;" it's simple physics.

But, boy, wouldn't it be grand to have that thing at the Air & Space Museum! I'd go see it in a heartbeat -- that is, after the crowds had subsided, which could be weeks. Maybe months. Much more practical, and orders of magnitude more affordable, would be to build a replica to put there.