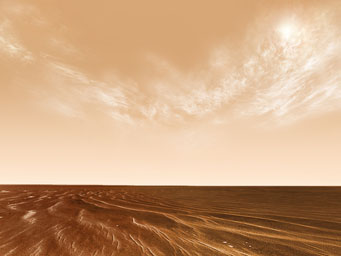 The image at right was created from eight photos taken by Mars Exploration Rover Opportunity. Just 29 hours after they were taken, the pictures had been posted to the internet, found by rover fans, assembled into a mosaic, and tweaked into several different interpretations, including this one. (Click here if the image fails to appear in this article.) The entire sequence unfolded spontaneously on an internet forum, with no explicit coordination.

This beautiful scene is just one of thousands produced by a lively international community of amateur image processors who are breaking down the barriers that formerly existed between interplanetary missions and the general public.

Click here to download a 1.5-Mb PDF of the complete article describing how these images are made, from the January 2010 issue of Sky & Telescope.

Click here for hyperlinks to all the websites referenced in the article.