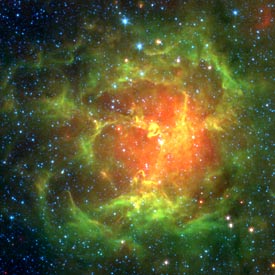 The Spitzer Space Telescope works in infrared light, which allows it to peer through the dusty veil of the Trifid Nebula (M20) to see 150 new objects, mostly newborn stars. This image was created from observations on March 31 and April 11, 2004. Red represents 5.8 and 8.0 micron bands, green is 4.5 microns, and blue is 3.6 microns. The dark dust lanes that crisscross the nebula in visible-light images appear as bright yellow regions of star formation in the Spitzer view. Click on the image to view a visible-light image and the Spitzer image side-by-side.

Stars in the process of forming compete with one another for resources as they grow. That's just one of the results that has emerged from new Spitzer Space Telescope infrared images that penetrate dust in the Trifid Nebula (M20), which lies 5,400 light-years away in the constellation Sagittarius.

Spitzer uncovered 120 young stars and 30 even younger protostars behind the dust. Ten of the protostars reside in four dense knots of dust, where astronomers had previously thought conditions weren't right for star formation. "Finally, with Spitzer infrared images, we can see what's going on in here," says team leader Jeonghee Rho (Caltech).

Two of the knots are giving birth to many stars at once. This defies conventional theory, which predicts that every star forms from a separate clump of material. In each knot, the most massive and rapidly growing protostar is located at the center, which is exactly what one would expect in a scenario where protostars have been competing for material. In this "competitive accretion" model, stars that form in a single knot move around through gravitational interactions as they grow, with the most massive star settling to the center. Since that is where the most material resides, the massive star's growth accelerates even further at the expense of its smaller siblings. "The monster in the basement eats everything," says Mordecai-Mark MacLow (American Museum of Natural History, New York). Astronomers can use Spitzer to track the growth rate of the protostars because the infalling material heats up and gives off infrared radiation.

The Spitzer image also reveals a single giant blue star at the Trifid Nebula's center, which Rho's team believes is triggering all the current star formation. Powerful radiation from the massive star sent shock waves rippling through the surrounding material, causing clumps of it to begin collapsing under gravity. "That's quite impressive," she says. "You can see how many children one parent can have."