NASA’s infrared Spitzer Space Telescope finally ran out of its liquid helium coolant and entered its “warm mode” last Friday, May 15th. The telescope has spent almost six years probing the cosmos, and it should continue work for at least another two. However, the telescope will now operate without two of its instruments: its long-wavelength imaging photometer and its infrared spectrograph. 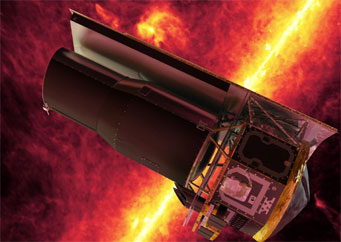 An artist's depiction of the Spitzer Telescope in front of an infrared view of the Milky Way's galactic plane.

Spitzer remained in its “cold mode” much longer than expected; initial pessimistic predictions gave the liquid helium just 2½ years to run out.

From less than 3 kelvins (3°C above absolute zero, or –459° Fahrenheit), the heart of the spacecraft has warmed to a still-frosty 31 kelvins. Objects as cold as this emit very little heat radiation, but the little that they do is mostly in the same frequency range as Spitzer’s long-wavelength detectors. So these now have their view washed out by the glow.

However, the two shortest-wavelength detectors of the telescope’s Infrared Array Camera, working at 3.6 and 4.5 microns (in the near- to mid-infrared), continue working perfectly.

Spitzer’s many successes to date include detecting the heat glows of planets of other stars for the first time. Astronomers have even seen weather effects on one of them this way. “Nobody had any idea Spitzer would be able to directly study exoplanets when we designed it,” said Michael Werner, Spitzer program scientist at NASA’s Jet Propulsion Laboratory. “When astronomers planned the first observations, we had no idea if they would work. To our amazement and delight, they did.”

Other notable credits include detailed mosaics of the central region the Milky Way (impossible for visible-light instruments because of opaque interstellar dust clouds), as well as the finding that our galaxy has only two big arms, not four as previously thought. The telescope has also been able to look into the structure of other galaxies and dust clouds in the Milky Way so that researchers can observe their structure and composition. Many compounds, including common organic molecules, leave distinct signatures in the infrared spectrum.

Spitzer’s infrared capabilities are also invaluable for studying the early universe. Very distant galaxies are highly redshifted because of the expansion of the universe, and this means that all of their output is shifted to longer wavelengths.

“We like to think of Spitzer as being reborn,” says Robert Wilson, Spitzer Project Manager (JPL). “Spitzer led an amazing life, performing above and beyond its call of duty. Its primary mission might be over, but it will tackle new scientific pursuits, and more breakthroughs are sure to come.”

Many of these breakthroughs will originate with, or will be supplemented, by other instruments. For instance, ESA’s new, larger (3.5-meter) Herschel telescope, launched May 14th, will work at some of the far-infrared wavelengths Spitzer has just lost — and will see even longer, “submillimeter” wavelengths as well.

See the NASA press release for more information on Spitzer and its new observing mode.

Valerie Daum is an editorial intern at Sky & Telescope

...it's how you lived that counts!" - Conan the Barbarian.