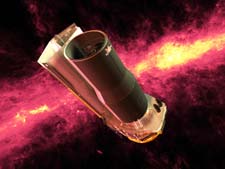 The Spitzer Space Telescope (formerly SIRTF) is unique in how NASA allocating its observing time. Each member of the Spitzer science team has a limited amount of "guaranteed" observing time — roughly 20 percent of the available time in the first 2 1/2 years and 15 percent thereafter. The team's observations will be made available to all interested parties after a one-year proprietary period. Special teams, known as Legacies, will enable even faster access to the data. These scientific groups are the winners of an open competition that was held in 2000. Together, the six Legacy teams involve more than 120 scientists and account for 3,160 hours of observing time, most of which will be scheduled early in the mission. Each team embodies an intense collaboration on a particular scientific topic that has been deemed worthy of dedicated attention.

GOODS will collect extremely deep, multiwavelength images to create publicly accessible databases for exploring the distant universe. Building on deep surveys by the Hubble Space Telescope, the Chandra X-ray Observatory, and the largest ground-based telescopes, the GOODS Legacy team will use Spitzer to stare at selected fields for 25 to 100 hours at a stretch. The team's primary aim is to perceive galaxies in formation at redshifts of 4 or more — looking back more than 12 billion years to a time when the universe was only 1 1/2 billion years old. By observing galaxies at differing redshifts, the scientists hope to characterize the full history of galaxies over cosmic time. Burning questions include how star formation has progressed according to galaxy type and what entities make up the mysterious infrared background.

SWIRE complements the GOODS program by covering much larger pieces of the sky at less depth. It will survey seven fields far from the murky Milky Way in seven imaging bands. The total sky coverage amounts to 70 square degrees. SWIRE will address the origin of large-scale structure in the universe. It will also provide an extensive database for discovering brown dwarfs, debris disks around young and old stars, small asteroids, and unanticipated rare objects in both the local and remote universe.

SINGS will closely examine a diverse selection of 75 galaxies within 100 million light-years of Earth. Elliptical, spiral, and irregular galaxies will be mapped, along with the more peculiar galaxies exhibiting starburst behavior. By combining the imaging and spectroscopic data obtained by Spitzer with radio maps of molecular and atomic gas, the SINGS team aims to calibrate the early universe's starbirth rates with the available stores of star-forming gas. SINGS scientists will also delineate the various processes that orchestrate star formation in galaxies — from the spiral density waves that herd and compress star-forming clouds along spiral arms, to the bar-driven gaseous inflows that are thought to feed circumnuclear starbursts.

GLIMPSE concentrates on our Milky Way galaxy, particularly, those portions interior to our solar orbit. This piece of real estate is pretty much terra incognita, as our location in the outskirts of the Milky Way makes looking inward problematic. We are fairly certain there is an inner ring of starburst activity is present, along with spiral arms of gas and young stars, a central bar of older stars, and a nuclear bulge of mixed stellar pedigree. However, we know very little about the actual dimensions and relative configurations of these various galactic components. To address these shortfalls, GLIMPSE will carry out a systematic survey of the galactic midplane. By detecting infrared hallmarks of the various evolutionary phases of starbirth, the survey will sketch out the key processes that drive our galaxy's fertile ecosystem.

This Legacy program gets even closer to the star- and planet-forming action. By fully mapping nearby star-forming clouds, c2d will discover protostellar cloud cores, protoplanetary disks, and young substellar objects (brown dwarfs and super Jupiters). The spatial arrangements of these embryonic stellar and planetary systems are of special interest, as they provide clues to the inner workings of molecular clouds.

Formation and Evolution of Planetary Systems

This program's goal is to place our solar system in context. Astronmers will target nearby Sun-like stars with ages of 3 million to 3 billion years for high-resolution spectroscopy. The results will provide key diagnostics on the evolutionary progression from circumstellar disks to full-fledged planetary systems. With its high sensitivity, Spitzer can detect residual dust belts similar to our Kuiper Belt out to a distance of 100 light-years. This Legacy program will help answer the question of our solar system's uniqueness, while laying the groundwork for future planet-finding missions.