The launch of Sputnik 1, Earth's first artificial satellite, paved the way for Moonwalking astronauts, robotic exploration of the planets, and space tourism. 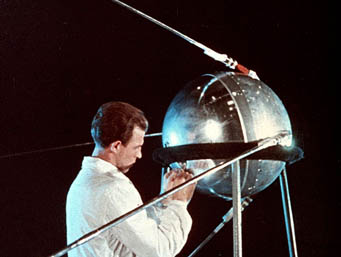 Soviet technician working on Sputnik 1 prior to its launch on October 4, 1957.

Sixty years after it officially began on October 4, 1957, we still often refer to the era we live in as the Space Age. Our extraterrestrial explorations have planted a set of mileposts in our memories — from those first brief forays into weightlessness to permanently occupied space stations, from spindly probes snapping a few pictures while whizzing past a distant planet to rovers probing every nook and cranny and telescopes peering into the deepest vastness. It’s no surprise that venturing beyond our home planet is considered by many to be the defining achievement of our era, a symbolic pinnacle of human civilization.

But for the United States, at least, the Space Age began not with glory but with worldwide humiliation.

In mid-1955 President Dwight Eisenhower declared that the nation would place a scientific satellite into orbit during the upcoming International Geophysical Year, a worldwide 18-month stretch of cooperative research. The IGY kicked off with much fanfare on July 1, 1957, with the U.S. envisioning a satellite launch later that year. But before the planned Vanguard satellite ever met its rocket, on October 4th a persistent beeping from orbit revealed that the Soviet Union had orbited the world’s first satellite, Sputnik 1, and in doing so had won the first leg of what would become a race to space.

Sputnik wasn’t much of a satellite, but it was a beefy 184-pound beach ball compared to Vanguard’s 3-pound grapefruit. Amateur skygazers, mobilized worldwide to track the first satellites, watched it pass overhead through their telescopes. And its simple beeping signal, powerful enough to be picked up by amateur radio operators around the world, left no doubt that the achievement was real. 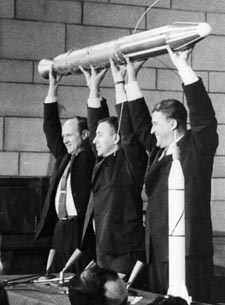 Holding aloft a model of Explorer 1 at a post-launch press conference in 1958 are (from left): William H. Pickering of the Jet Propulsion Laboratory; James A. Van Allen, whose instrument discovered radiation belts encircling Earth; and Wernher von Braun, leader of the US Army team that built the Juno launch rocket.

The US effort swung into overdrive. After a spectacular Vanguard launch failure, televised live that December, Washington officials gave the nod to a parallel satellite program headed by Wernher von Braun, and Explorer 1 rocketed into orbit successfully on January 31, 1958. It was followed on March 17th by Vanguard 1 — which, as just the fourth satellite ever launched from Earth, remains in orbit today. Later that year, Congress created a new agency, the National Aeronautics and Space Administration (NASA), to lead the fledgling U.S. space effort.

Today we take so much of what followed Sputnik 1 into space for granted. We think little of the fact that a phone call from here to the next town might bounce off a satellite 22,400 miles overhead, that a few keystrokes can instantly summon an online satellite view of anywhere on Earth, that space has become the ultimate platform for observing our universe, or that we can send little remote-controlled vehicles to probe odd-looking rocks on a planet 100 million miles away.

And nowadays even the promise of inexpensive, routine flights into space is back again, but in a new guise: an armada of entrepreneurs who think that the open market can deliver what decades of government bureaucracy could not. Eager customers have already snapped up $200,000 tickets for half-hour flights to the fringes of space, while space hotels and even privately-funded Moon bases are taking shape on computerized drawing boards. 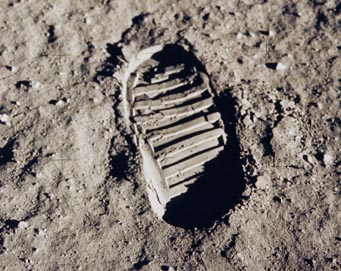 The touchdown of Apollo 11 on the Moon on July 20, 1969, is still considered by many to have been the pinnacle of human achievement in space to date.

The first 60 years of space exploration was just the bumpy beginning of what might be an endless, gradual expansion — just our first walks around the block after leaving the cradle of Earth. The decades ahead will no doubt bring us face to face with marvels we can’t yet imagine, as we explore our near and distant environs more deeply.

But there will always remain something special in our collective human memory about the first halting steps made into the cosmos that surrounds us. Even the language we use, in dozens of words and phrases, now draw from the A-OK’s, the nominals, and the major malfunctions of the space program.

As we strive to understand the universe we live in, all systems are go, and the countdown has just begun.

This essay is adapted from the introduction to Space: 50 Years and Counting, published in 2007 by the editors of Sky & Telescope.

Yep...
I still remember the beep-beep-beep ~ 20Mhz, as a young lad in late 1957, on my parent's 5 valve superhet Philips Radio, down here in NZ. Last for a few weeks I think.

That was a very long time ago, still feels like just yesterday.

The USA certainly started taking the USSR a lot more seriously after that.
At elementary school ~ 1959, I used to call Sputnik... "First-nik").
It certainly was the first of many more to come..

The Space Race was ON!

The Soviets came up with a great name for their satellite: Sputnik, in English that would be "little Moon."

That's a very literal translation. Sputnik means satellite, and until 1957 the Earth had only one satellite, the Moon. I've read several histories and memoirs, including Werner von Braun's, that translated sputnik as "little Moon." So I will continue to think of the Sputniks as little Moons.

They certainly did, Anthony.
Couldn't agree more.
Those were certainly remarkable days, for sure!

Sputnik II even carried Laika.
As a very young kid:- I got very emotionally attached to that Soviet "space-pooch"
R.I.P. little woof-woof.

With regard to Sputnik 1 there is a great book detailing the early space race. It is called " RED MOON RISING" by Mathew Brezinski. It was on the BBC radio few years ago.