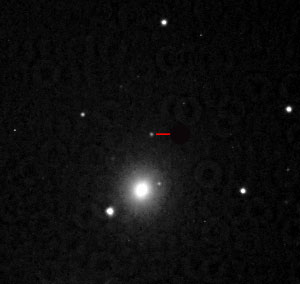 The Type Ia supernova 2007on (with red tick) blew up last November in the outskirts of the galaxy NGC 1404, located 65 million light-years away in Fornax.

For the first time ever, astronomers may have found the progenitor of a Type Ia supernova. Or, frustratingly, maybe not.

This matters. The astronomers hoped their discovery would finally settle the nature of these exploding white-dwarf stars, which have become a critical tool for cosmology in the last ten years. But, as happens so often, a definitive answer isn't coming easily.

In old data archived from NASA's Chandra X-ray Observatory, Rasmus Voss (Max Planck Institute for Extraterrestrial Physics, Germany) and Gijs Nelemans (Radboud University, the Netherlands) found an X-ray source at the location where a Type Ia supernova, SN 2007on, later blew up. The supernova was discovered on November 5, 2007, in the outer edge of NGC 1404, an elliptical galaxy some 65 million light-years away in the southern constellation Fornax.

If the X-ray source was indeed the supernova's progenitor, notes Nelemans, this would support the theory that Type Ia explosions occur in binary-star systems where matter from a normal star streams onto a white-dwarf companion. The nuclear fusion of the freshly arrived material on the dwarf's surface would produce strong X-rays.

If such a feasting white dwarf grows heftier than 1.39 solar masses (the "Chandrasekhar limit"), it can't hold itself up against its own gravity anymore, and it starts to collapse inward. Within moments the temperature and pressure at its center become so great that the entire star explodes in a runaway thermonuclear reaction — as a distinctive, Type Ia supernova.

Because all white dwarfs have the same mass when they reach this tipping point, astrophysicists expect all Type Ia's (of a given subtype) to have the same luminosity. Therefore, cosmologists believe they can use Type Ia's as accurate "standard candles" to measure the distances of remote galaxies independently of redshift. By comparing the supernova distances to the redshifts of the host galaxies, astronomers can chart the history of the universe's changing expansion rate. In 1998 such studies led to the discovery that the expansion is speeding up, presumably due to some kind of "dark energy" pervading space.

But no one knows for sure whether Type Ia supernovas really arise from a white dwarf accreting matter slowly from a normal star. Another possibility is that the blasts result from the merger of two white dwarfs in a close binary system spiraling together. A better understanding of the nature of Type Ia progenitors might help firm up the cosmological supernova data.

There's a key difference between the two scenarios. In the slow-accretion version, matter falling onto the white dwarf makes it shine brightly in X-rays. In the two-white-dwarfs version, no matter is exchanged beforehand and the system is essentially X-ray dark.

Voss and Nelemans published their discovery of the possible X-ray progenitor of SN 2007on in the February 14th issue of Nature. It seemed to settle the question in favor of the standard, slow-accretion model.

However, after their paper was accepted for publication in mid-December, nagging doubts about the apparent association have surfaced.

In particular, more precise measurements of the supernova's position with telescopes run by the European Southern Observatory in Chile, including the Very Large Telescope at Cerro Paranal, reveal a small offset from the Chandra X-ray source's position. The discrepancy is barely more than one arcsecond, but that's enough to mean the X-ray source and the supernova had nothing whatever to do with each other — if in fact the X-ray position is as accurate as Chandra's operators believed.

Probably it is. Only a few X-ray photons were detected in the four-year-old Chandra observation, but that's enough that the probability of the X-ray source really being the supernova progenitor is now estimated to be no more than 1 percent, says Nelemans.

On the other hand, given the rarity of similar X-ray sources, the probability of a chance alignment is also less than 1 percent! "One way or the other, we have come across a very improbable event," says Nelemans.

Future observations should settle the issue. If the X-ray source was indeed what blew up later, it should now be gone. Voss and Nelemans are applying for Chandra time later this year to check.

Meanwhile, they are on the hunt for X-ray progenitors of other Type Ia events.

I don't recall being asked about my image being used in a semi-commercial manner. Can you confirm when this was done.