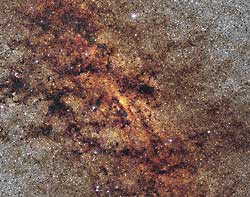 An infrared view of star swarms toward the Milky Way's center. This frame, from the 2MASS all-sky survey, is 800 light-years wide. The action described in the accompanying article takes place within a central pinpoint of this image.

After tracking its motion for 10 years, astronomers have caught a star careening around the supermassive black hole at the Milky Way's center. Their observations, reported in tomorrow's issue of Nature, provide definitive proof that a roughly 2.6-million-solar-mass black hole lurks at the core of our galaxy. "It’s an incredible breakthrough," says team leader Reinhard Genzel (Max Planck Institute for Extraterrestrial Physics, Garching, Germany).

Astronomers have long thought the Milky Way harbors such a black hole in its center. But undisputable evidence has been scarce. Many observations, such as the rapid motions of stars and gas clouds near the object, could also be explained by some other very dense mass concentration, such as a swarm of dark neutron stars or even a pool of cold neutrinos. A large mass was clearly there, but as long as astronomers couldn't tell how tightly packed it was, they couldn't be sure it was a black hole.

The beauty of the new result, says Genzel, is that the existence of the black hole is proven beyond doubt by observations of one single star.

The team of 23 mostly European astronomers performed a traditional binary-star analysis on data they gathered by very modern means. For 10 years the team has used near-infrared cameras on giant telescopes with high-resolution adaptive optics to follow the motions of the brightest stars in the galaxy's central fraction of a light-year. The stars were clearly moving under the influence of the dark object's intense gravity. Then from mid-2001 through July of this year the team caught one star making a very fast loop around the location of the enigmatic radio source Sagittarius A*, long believed to mark the position of the black hole. Suddenly the astronomers had good measurements defining more than half of the star's elliptical orbit — the longtime standard for specifying a binary star's true orbit in space with confidence.

The star, known as S2, follows a small, very elongated orbit (eccentricity 0.87) with a period of just 15 years. "We were lucky to get it so rapidly," says Genzel.

At its closest approach last March, the star swung within 17 light-hours of the hole, only three times the average distance of Pluto from the Sun. But while Pluto moves at a leisurely pace of less than 5 kilometers per second, S2 traveled more than 5,000 kilometers per second — proof of the enormous mass inside its tiny orbit. "The only compelling explanation is that there is a supermassive black hole lurking there," writes Karl Gebhardt (University of Texas) in an accompanying Nature commentary.

"This is fabulous stuff," comments Andrea Ghez (University of California, Los Angeles). "These measurements are very hard to make." Ghez leads a competing team which uses adaptive optics at one of the twin 10-meter Keck telescopes on Mauna Kea, Hawaii, to study stellar motions in the core of the Milky Way. "We observed the same star, and there’s a 100-percent match between our results and theirs," she says. Ghez’s team even managed to measure a radial (line-of-sight) velocity, improving the orbital accuracy. She will present her results at several conferences this fall.

Further details are in a European Southern Observatory press release and on the research team's Web site, which includes an animation of all the stellar proper motions in the black hole's vicinity.