On January 23–26 New Zealand's Phoenix Astronomical Society held its 16th annual Stardate star party near Napier on the North Island's east coast. Nearly 150 attendees were treated to spectacular views of the Magellanic Clouds, the Eta Carinae Nebula, and a host of deep-sky splendors in the rich southern Milky Way. An auroral display on the 23rd as well as the fine placement of Comet NEAT (C/2001 Q4) near the Small Magellanic Cloud added to the sky's grandeur that night. "To quote Tina Turner," says Lesley Hall, the event's organizer, "this year's Stardate was 'simply the best, better than all the rest.'"

But the observing was just a part of Stardate's success. "This year," Hall says, "Stardate achieved a balance, providing a little bit of enjoyment for everyone — from kids to adults, from telescope makers to binocular observers, and from astrophotographers to armchair learners." 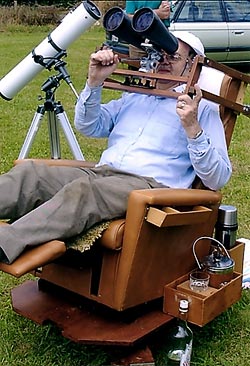 One of this year's outstanding creations was the modified Lazy Suzan/La-Z-Boy binocular-observing chair by Robert Snowball, which he calls the Lazy Astronomer's Chair. This luxurious leather recliner has side panels to hold everything, from star charts to hot drinks; for those cloudy moments, Snowball had a ready-to-grab copy of Harry Potter and the Order of the Phoenix — just recline and read until the stars return.

Malcolm MacDonald displayed a novel telescope platform for disabled observers confined to a wheelchair. MacDonald removed the chair's armrests and replaced them with hollow-tube scaffolding, which was used to support a Newtonian reflector on a wooden Lazy Susan platform. This platform did not lay flat but was locked into place on its side atop the scaffolding. A hole cut through the center of the Lazy Susan allowed the telescope's rack-and-pinion focuser (which was at the center of the tube) to poke through the hole. This way MacDonald could raise and lower the telescope in altitude but keep the eyepiece at eye level. MacDonald then placed a Frisbee under the left wheel of the chair and locked the brake. Next he turned the chair's right wheel with his hands and began turning in azimuth; the Frisbee marked the chair's axis of rotation. 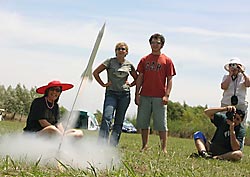 One of Stardate's popular daytime activities was the launching of a model rocket.

Other daytime activities included lectures and workshops, sausage sizzles, and children's programs. The Telescope Trail, a concept borrowed from the Oregon Star Party in the United States, features an "astroguide" who leads participants across the observing field, stopping along the way to talk to the telescopes' owners and makers about their instruments. It's an educational and entertaining way to learn about the novelties of each scope and the motivation behind some brilliant telescope-making ideas.

Families also had a choice of observing or watching a late-night science-fiction movie. In one popular lecture, Kay Leather, public programs officer at Carter Observatory, discussed the upcoming transit of Venus.

Ian Cooper of Palmerston North, one of the country's best visual observers, got everyone excited about the possibility that two naked-eye comets — NEAT (C/2001 Q4) and LINEAR (C/2002 T7) — could brighten to magnitude 2.5 or 1 and be visible simultaneously in the southern skies this May. If these comets live up to expectation (and they may not), it will be a sight that hasn't happened in such splendor since 1881.

One thing is for sure. Richard Hall, president of the Phoenix Astronomical Society and one of New Zealand's most dynamic lecturers, says that "Comets or not, this year's Stardate did live up to expectation. The immediate feedback from the participants was overwhelmingly good; most said it was the best Stardate ever. And that's satisfying. It makes all our efforts worthwhile, doesn't it?"