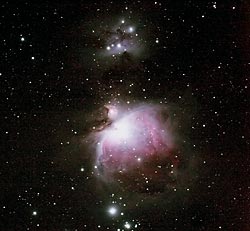 The Orion Nebula is home to several binary star systems whose members have split up and gone their separate ways.

It's inevitable; some couples will break up. This is as true for stars as it is for people. But unlike counselors here on Earth, astronomers can only chronicle the separations of pairs seen in the heavens, and are limited to simply tracking the post-relationship lives of the past partners.

One place where binary systems have split violently is the Orion Nebula. New numerical models demonstrate how two binary systems there came together 2.5 million years ago, exchanged partners, and then parted ways. One of the binaries broke up permanently: the estranged dancers AE Aurigae and Mu Columbae. The new pairing goes by the name Iota Orionis. Meanwhile, not far away, another runaway star known as the Becklin-Neugebauer (BN) object, races half-hidden through the interstellar medium.

Astronomers have long known that AE Aur and Mu Col are storming away from the Orion Nebula in nearly opposite directions at speeds greater than 100 kilometers per second. Tracing their motions back in time, one finds the eccentric binary system Iota Ori recoiling from the same spot. Iota Ori consists of two massive stars with different ages in eccentric orbits. This implies that the stars didn't form together but rather gravitationally embraced during a multiple close encounter that left them both a bit off balance. According to Peter P. Eggleton (Lawrence Livermore National Laboratory), "This demonstrates that complex interactions happen in modest-size collections of massive stars like the Orion Nebula."

New models by Eggleton, along with Alessia Gualandris and Simon Portegies Zwart of the University of Amsterdam recreate the motions of these stars, allowing us to see how they probably all came together and flew apart at once. The models suggest that Iota Ori A, the brighter of the Iota Ori stars, likely formed in a binary with AE Aur, while Iota Ori B started life paired with Mu Col.

"Our solution doesn't exactly reproduce the system, but it describes all the major ingredients in what happened," says Eggleton. The discrepancies may arise from a possible third star in the Iota Ori system.

Harder to trace is the history of the Becklin-Neugebauer (BN) object. This bright infrared star is moving roughly 40 kilometers per second through a mostly opaque part of the Orion Nebula, shocking gas into emitting X-rays as it pushes through the interstellar medium. Its breakneck speed hints at an unusual past.

In a paper submitted to Astrophysical Journal Letters, Jonathan C. Tan (Princeton University) traced the BN Object's motion backwards and concluded that it too came from a multi-star system. Only 4,000 years ago, the BN Object passed through the famous multiple star Trapezium on a path that would have intersected with Theta Ori C, the Trapezium's brightest component. Theta Ori C is a binary system consisting of two massive stars in eccentric orbits. It is moving away from the BN Object's point of origin.

"This star was ejected at a time within recorded human history, just after the building of the great pyramids of ancient Egypt" notes Tan. "This newness makes it unique and allows us to probe the details of the ejection event."