For more than 30 years, Villanova University astronomer Ed Guinan has been plagued, puzzled, and perplexed by DI Herculis. On the surface, this binary star seems pretty much like any other binary star, with two stars going 'round and 'round each other in a predictable, orderly fashion. But there remained a nagging problem that as much as Guinan wanted, he couldn't just sweep under the rug: DI Her was not behaving in accordance with Einstein's general theory of relativity. 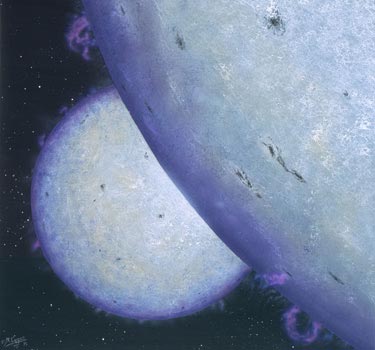 The binary star DI Herculis consists of two B stars separated by about one-fifth the Earth-Sun distance. Both stars are about 5 times the mass of our Sun. No artist's rendition, like the one shown here, can possibly portray the fact that these stars have about 50 times the surface brightness of the Sun.

Every year, Guinan and his colleagues would observe the 8.5-magnitude star. The two stars orbit each other in a plane lined up perfectly with Earth's line of sight, and they eclipse each other every 10.55 days. Thanks to these eclipses, which have been recorded since 1900, Guinan could make exceedingly precise measurements of the stars' masses, sizes, luminosities, and orbital characteristics.

Almost every known aspect of the system was hunky-dory. The stars are exactly as massive, large, and bright as theory predicts. But in a series of published papers, Guinan and his Villanova colleague Frank Maloney kept pointing out that the orbit was not behaving in accordance with general relativity, the cornerstone for modern science's understanding of gravity.

For years, Guinan looked for a third star in the system, or some other factor that could be throwing the orbit out of whack, but to no avail. The point in the orbit at which the two stars come closest continues to advance (precess) each orbital cycle at a rate only one-fourth the amount theory predicts. Guinan continually receives mail from armchair theorists who attempt to explain DI Her's anomalous precession with alternative theories of gravity. 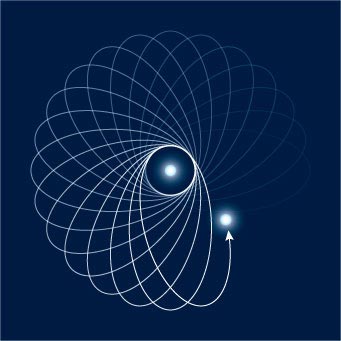 Finally, after decades of frustration, a group led by Simon Albrecht (MIT) has solved the problem, and Einstein's theory has survived unscathed. "The monkey has been lifted off my back," jokes Guinan.

After being informed about DI Her by Guinan, Albrecht and his colleagues took detailed spectra in 2008 using a 1.93-meter telescope in France. These measurements, unlike earlier ones made by Guinan and others, were obtained with a high-resolution spectrograph. With more modern equipment, computers, and techniques, Albrecht revealed that the rotation axes of the two stars are tipped over on their sides with respect to the orbital plane (similar to Uranus's orientation with respect to the Sun), which makes DI Her an oddity among closely separated binary stars.

In this unusual arrangement, gravitational forces created by the misaligned equatorial bulges of the stars give them an extra "kick" when they are closest in their elliptical (oval-shaped) orbits. This kick reduces the orbital precession to the observed rate, eliminating any discrepancies with Einstein's theory. "We consider the mystery of the anomalous orbital precession of DI Herculis to be solved," says Albrecht, whose paper will appear in tomorrow's Nature. 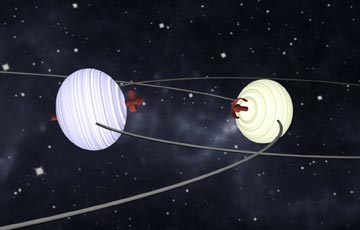 This illustration demonstrates how the equatorial bulges of the two stars in DI Herculis are nearly perpendicular to the binary's orbital plane. This unusual configuration explains why DI Her's orbital precession is not in accordance with theoretical predictions.

Guinan concurs, but he adds, "I'm relieved that the general relativity problem is solved. But it's been replaced with a new mystery."

DI Her's two members, both hot, massive, B-type stars, should have formed from a common disk of gas and dust. By feeding from the same disk, the spin axes of the two stars should be nearly perpendicular to the orbital plane, an arrangement seen in the large majority of binary stars, especially those like DI Her that have small separations.

"My guess is that there was a third-body interaction that perturbed the system, or the two stars formed separately and formed a binary through a capture process," says Guinan. "Another possibility is that our ideas of how binaries form may be off." 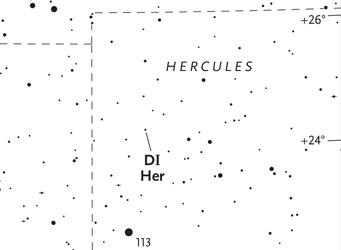 Together with MIT colleague Joshua Winn, Albrecht is observing other binary systems that display similar anomalies. "We want to understand if DI Her is a unique system or if misalignment is more common among close systems," says Albrecht. "We also want to understand what might cause this misalignment. Clearly, there is more going on then we guessed so far."

Even if Einstein's theory remains safe and sound, astronomers and physicists continue to subject it to more stringent tests. Given general relativity's incompatibility with quantum mechanics (the theory that describes the microworld of atoms and light with extraordinary accuracy), scientists expect that Einstein will not have the last word on gravity. Ultimately, it will be replaced by an even deeper "theory of everything."

General relativity is compatibile with quantum mechanics. It's a math problem. See

Does any one think that, thanks to Einstein's math, we

can now prove that, in reality,

And further, that because of this fact,

Thus, when we pass away, our life force will be returned to

the universe as pure energy,

and we will continue to live in that form until once

again captured and frozen in time?

Does any one think that...? Yes, lots of people think that, but they are wrong.

How do we (always?!) go from GR to religion. I do not think that I, typing away as this keyboard, am just "molecules in motion." If that is the case, then I have no free will and the moderators at S&T can hardly blame me for what I am typing! Yes, GR is a wondrous and beautiful theory of gravitation, and the "final" theory (if there is ever one) will be even more beautiful and descriptive. However, there is no ultimate theory of the Universe, except in the mind of God who created it, which is why it is so orderly and beautiful to begin with.

Okay, if you are going to throw verbal tomatoes at me, remember, we are all just "molecules in motion," or not! (I choose the latter option, by the way.)

Don, I also choose the "not". BUT, that "not" does not necessarily imply a god in any way, shape or form!! It is patently ridiculous, to make the logical error of insisting that a god is the only alternative to choose from. There is much more to the universe, Horatio, than is dreamt of by those that can see only gods and other mythology. Heisenberg's Uncertainty Principle, which is rampant at the quantum level,leaves plenty of wiggle room for free will. By contrast, an omniscient god eliminates the possibility of free will altogether!

This is just a wonderful article! Relativity has been tested time and time again and has survive all assaults - impressive by any standard!

Einstein wins another one! I'm glad to hear this was solved -- I remember in a GR course I took long ago, that even the famous case of Mercury's anomalous perihelion precession (PP) was not so straightforward as is sometimes simplistically related. The total PP rate is about 5600 arcsec/century, of which about 90% is due to one classical effect, 9% to another classical effect, and only the remaining 1% was 'anomalous' until GR came along. (The two classical effects were the sun's oblateness acting on Mercury's inclined orbit, and perturbations from other planets -- I think the former was the 90%, but not certain. In fact, it's surprising that the solar oblateness can even be measured accurately enough not to swamp that tiny anomalous portion of the PP!) So I guess I'm a bit surprised that stellar oblateness (at a non-negligible inclination to the orbital plane) wasn't considered more seriously from the start. Was it too much inside-the-box thinking, or was it because that brings up the other problem, mentioned in the article: the puzzling origin of such a system?

Different planets have different eccentries. Is there any logic behind an eccentry? Moreover why do heavenly bodies move in eccentric orbits?