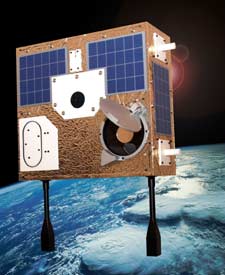 The Canadian-built Microvariability and Oscillations of Stars (MOST) satellite was launched into a polar orbit from northern Russia on June 30, 2003. Its mirror is just 15 centimeters across, but its ability to make extremely precise brightness measurements, as well as to stare at a single star for weeks on end, allows it to do some unique science.

Astronomers have been watching stellar pulsations of the bright star Procyon in Canis Minor since 1986. So when scientists recently announced that the most sensitive observations ever made of the star show nothing of the sort, it created controversy.

The suitcase-size Microvariability and Oscillations of Stars (MOST) satellite, built in Canada, has been carrying out long-term monitoring of the brightness of various stars since its launch in June 2003. It has already produced the first "movie" of starspots (sunspots on another star) being carried around by the distant object's rotation.

For the entire month straddling January and February 2004, MOST fixed its gaze on Procyon. It was looking for "p-modes," which are giant sound waves produced by convection currents in stellar atmospheres. P-modes have been detected in the Sun and other Sun-like stars, and cause small but telltale variations in a star's brightness.

In a paper published in the July 1st Nature, Jaymie M. Matthews (University of British Columbia) and colleagues report that it did not see any brightness variations indicative of vibrations. Yet at least seven different teams using ground-based telescopes have reported detections of p-mode vibrations on Procyon. Can the results be reconciled?

There appears to be some wiggle room. For one thing, the MOST telescope used a different method to search for vibrations than did the Earth-based teams. Rather than looking for brightness variations, ground-based studies watch for changes in the star's spectrum that accompany the radial-velocity (motion toward and away from the observer) vibrations of the star's surface.

The MOST team argues that the size of the oscillations seen in radial-velocity studies of Procyon implies that the brightness variations should amount to 15 or 20 parts per million, which would bring them within range of the satellite's sensitivity. However, in an as-yet-unpublished letter, many other astroseismologists argue for a figure of 7 or 8 parts per million, which is too small for MOST to see.

"We are certainly not surprised that they don't find any p-modes," says Hans Kjeldsen (University of Aarhus, Denmark), who is one of the letter's coauthors and who has collaborated on Procyon observations from the ground.

Regardless of who is right about the precise figure, the MOST results reinforce one conclusion reached by radial-velocity studies: theories of stellar oscillations are seriously out of whack. The theories say a star like Procyon should exhibit brightness variations amounting to 60 parts per million, which is completely at odds with direct measurements from MOST and estimates from radial-velocity measurements.

"It appears now that the simple theories we used before do not work," says Dimitar Sasselov (Harvard-Smithsonian Center for Astrophysics), a theoretical astroseismologist and member of MOST's science team.

"One thing that comes out of this is that we need to do better three-dimensional modeling," says Kjeldsen. "I also think there will be an increasing interest in doing more ground-based [observations] now to prove that they were really oscillations, real oscillations."

MOST will next turn its gaze to 51 Pegasi, which in 1995 became the first Sun-like star known to have an orbiting planet. The MOST team hopes these observations will lead to the first detection of starlight reflected from an extrasolar planet's atmosphere.