A major dust storm erupted on Mars in mid-2001 and quickly shrouded the planet in a salmon-hued cloak. When the Hubble Space Telescope recorded an image on June 26th (left), yellowish clouds had already churned up in the Hellas basin (medium-bright area near the upper-left limb). Ten weeks later, the storm still masked even the dark, easy-to-spot features Sinus Sabaeus and Sinus Meridiani (near center). South is up.

In August 2003 Mars passed closer to Earth than it has in thousands of years, providing wonderful views for telescopic observers. The only planet whose surface we can see (except for tiny Mercury), Mars is Earth-like in many respects. It has an axial tilt of 25.2° and exhibits seasons characterized by the waxing and waning of its polar ice caps. As the red planet neared opposition on August 28th, observers were treated to views of the rapidly shrinking south polar cap (SPC), which was tilted toward us. In addition, Mars’s numerous dark surface markings often change in shape and intensity over time scales of months to decades.

However, during this opposition of Mars, keen-eyed observers worldwide will be on the lookout for one of the most spectacular planet-altering events in the solar system: the development of a major Martian dust storm.

The ochre-hued dust clouds of Mars come in a wide variety of sizes and dynamic styles, ranging from the fleeting "dust devils" frequently detected by orbiting spacecraft to massive clouds that can rise into the upper atmosphere and circle the planet in a matter of days, virtually obliterating surface features on a global scale. These effects often last weeks or months.

Martian dust storms can be triggered at any season during the red planet’s year, but they tend to be more frequent at certain times. Our statistical study of Martian meteorology, based on a 38-year data set obtained from the Mars Section of the Association of Lunar and Planetary Observers (ALPO), demonstrates that these events are much more likely to occur when the planet is closest to the Sun, which corresponds to spring and summer in its southern hemisphere.

Although numerous dust storms have been detected during early northern summer, the main peak in activity occurs during midsummer in the south, with a secondary peak a few months earlier as the planet nears perihelion. Note that this year's opposition also took place when Mars was at perihelion — a time when the planet can be very dusty indeed!

What does this mean for the amateur observer? The good news is that, though immense global dust storms are firmly entrenched in Martian lore, they are actually rare. After an exhaustive study of past Martian dust storms, Richard McKim, director of the Mars Section of the British Astronomical Association (BAA), concludes that only 10 planet-encircling events have been reported in the past 130 years. Of these, only the 1971 storm was truly global.

The bad news is that most of them took place within the last three decades. In view of the increasing frequency and severity of these episodes, many astronomers predict that there is an excellent chance that Mars will be obscured by dust sometime during 2003.

But don't worry too much about a dust cloud "going global." Localized dust storms, like those in 1990, are far more common, flaring up suddenly and lasting only a few days. These are well worth study, however, since they can provide insights into Martian meteorology and may be precursors of more widespread events.

The major dust storm that erupted on Mars in June 2001 quickly shrouded the planet in opaque haze. These views, acquired by the Thermal Emission Spectrometer on NASA’s Mars Global Surveyor and centered on longitude 270°, captured the storm’s onset in the Hellas basin (upper right in each view) beginning in mid-June. The storm intensified dramatically in early July and did not abate for many weeks. South is up.

Although very thin, the Martian atmosphere is very dynamic, exhibiting many types of clouds and hazes — and not all of them are due to airborne dust. During late spring and early summer, clouds composed of water-ice crystals form over the lofty summits of the huge volcanoes on the Tharsis shield, often giving Mars the appearance of a domino. These orographic clouds form near local noon and increase in intensity and size as the Martian afternoon progresses; near the evening limb, they often rival the polar caps in brightness. Since the planet’s atmosphere usually looks dark in blue light, these and other discrete water-ice clouds are best viewed through blue filters, such as Wratten 47 or 38A (see the table below). With Mars near opposition, light blue (80A) filters should reveal these clouds when using telescopes as small as 3 to 4 inches (75 to 100 millimeters) in aperture.

How will you know when a dust storm is under way? Watch for two diagnostic signs:

Moving obscurations. Dust clouds usually originate in the planet’s bright "desert" areas and then move or expand to cover neighboring dark regions. This is the sine qua non of Martian dust clouds. Absence of movement and of obscuration disqualifies a candidate from being called a dust cloud. During their initial stages the small ones are sometimes difficult to detect. A sudden change in the outline or intensity of an albedo feature (bright or dark marking) is often the first indication that a dust storm is brewing.

Bright in red light. In the past, Martian dust clouds were usually referred to as "yellow clouds or hazes." This is now discouraged, since a cloud’s color cannot be perceived or even imaged except through very large telescopes. To make reliable observations of dust clouds you must judge their relative brightness through color filters. If a suspect cloud is not bright in red light, it is most likely not dust. Dust clouds are also bright in yellow light — but then nearly everything on Mars is bright through a yellow filter!

Dust clouds may also appear bright in blue and violet light, especially early in their development. This suggests the presence of ice crystals. A likely explanation is that micron-size dust grains, which are carried aloft during the initial phase, act as condensation nuclei for water-ice crystals. As storms mature they appear to be composed of three visible parts: a bright white-yellow core, a surrounding ochre pall obscuring surface features, and small peripheral ice-crystal clouds that are bright in blue light.

Often dust storms begin in multiple locations. This was evident in the dust events of 1990, when no fewer than five localized dust clouds sprang to life in a few days. The planet-encircling dust storm of 2001 started in the Hellas basin and spread eastward. A few days later separate fresh dust clouds were detected halfway around the globe, over Solis Planitia.

Martian dust storms are often accompanied by transient dark markings called anomalous albedo features. The exact nature of these is uncertain, but they may be nothing more than shadows cast by towering dust clouds. The heights of these dust clouds in 2001 were found to be at least 8 km by ALPO astronomer Richard Schmude. At one point the only surface features visible were the volcanic peaks jutting from the Tharsis plateau. Another possible explanation for the appearance of anomalous albedo features is that high winds generated near a large dust cloud scour away surface dust, exposing underlying dark material.

When significant quantities of dust are present in Mars's atmosphere, brilliant limb hazes appear and the polar hoods may weaken. In addition, the polar cap often stops regressing (shrinking), and it may temporarily expand.

Following dust storms observers often notice less contrast between Martian dark and light features. The airborne particles are incredibly small, smokelike motes roughly a few microns across. Consequently they do not immediately settle back to the surface but tend to remain aloft for several months. The cause of the contrast loss is not surface deposition but rather a dusty atmosphere.

These bright and dark albedo features on Mars, which bear traditional names, are what observers are most likely to see with a telescope. North is up; longitude is labeled along the bottom. Click on the image to see the complete map.

McKim’s analysis of 58 regional and planet-encircling storms observed since 1877 reveals that these events have a predilection for originating at two prime sites: the Hellas basin and Thaumasia (the region around Solis Lacus that includes Valles Marineris). Another region that warrants scrutiny is the Libya-Isidis desert, located east of the Syrtis Major plateau. Other trigger sites are known, but regional and encircling storms tend to begin in locales where the Sun passes directly overhead, and for the 2003 apparition Hellas and Thaumasia are the most likely candidates.

Hellas, a huge, ancient impact basin whose floor is more than 6 km below the Martian equivalent of sea level, has been very active during the past 100 years. The major dust storms of 1909, 1911, 1924, 1939, 1956, 1971, and 2001 all appeared there first. Atmospheric researchers speculate that frigid air coming off the south polar cap moves northward across Hellespontis and rapidly sinks into Hellas, generating winds strong enough to move dust grains. Many are too heavy to stay aloft in the thin Martian air, but they contribute to the dust cloud through their constant hopping motion, or saltation, which kicks lighter particles upward with enough force to keep them airborne. The net effect is similar to a chain reaction: these fine suspended dust particles absorb sunlight and heat the surrounding air, which expands, rises, and creates even stronger surface winds. If sunlight is strong enough, a towering, explosively rising dust cloud can result. 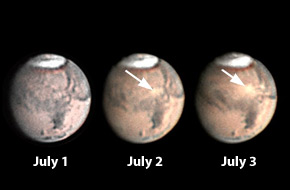 This three-panel image of Mars shows how the dust storm (arrowed) between Syrtis Major and the Hellas impact basin grew in size and brightness during July 2003. These images were taken by Donald C. Parker with his 16-inch Newtonian reflector in Coral Gables, Florida. The storm has since faded.

Dust plays a key role in the current climate of Mars, and there is strong evidence that it also has a major influence on long-term climate as well as surface geology. A thorough knowledge of Martian dust events is essential if human exploration of the planet is to succeed. Despite the presence of spacecraft monitoring the planet, much information on the evolution of dust storms can still be gleaned from ground-based observations. Since Mars takes only 39 minutes longer than Earth to rotate on its axis, a worldwide network of observers, both amateur and professional, must monitor the planet to provide continuous coverage.

Such a network, the International Mars Patrol (IMP), has been in place for several years and has pooled observations and alerts from ALPO, BAA, the Oriental Astronomical Association (OAA), and independent astronomers from 19 countries.

Amateurs are welcome to submit their images, drawings, and findings to the Mars sections of ALPO, the BAA, and the OAA, as well as Marswatch 2003. So far we've had a "clear Mars" in 2003 — but if a "dusty Mars" occurs, we look forward to seeing one of the most interesting spectacles in the solar system.