A cool, super-Jupiter might thwart expectations about exoplanet atmospheres.

Imagine you’re staring at a man’s shadow. You can make out the size and shape of his body, maybe guess his height, and catch any dramatic movements he makes. But you’d have no idea whether he had blue eyes or dark hair, or if his eyes were open or closed. If I hadn’t told you, you might not have even known whether this person was a man or a woman. 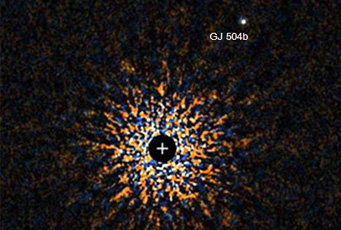 This near-infrared false color composite shows the exoplanet around the Sun-like star GJ 504 (also called 59 Virginis) as a white spot in the upper right corner of the image. Techniques suppress the light from the host star, and the appearance of the white spot in both observations set the companion apart from the background noise.

That’s similar to the dilemma exoplanets researchers face: most planets are so dim relative to their host stars that astronomers can only detect them indirectly (for example, a slight dip in a star’s brightness might signify that a planet is crossing its face). Only about 30 out of nearly 900 confirmed exoplanets have been found by actually spotting the planet as a dot in an image. But such direct detection offers the chance to measure the light from the planet itself at different wavelengths, potentially revealing properties such as luminosity (brightness), temperature, and atmospheric makeup. 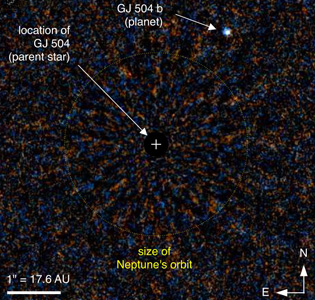 GJ 504b orbits at least 44 Earth-Sun distances from its host star, similar to Pluto's average distance from the Sun. The light from the host star has been suppressed in this image, revealing a tiny blue-white companion in the upper right corner. Click on the image to see two side-by-side observations of the speck which distinguish it from background noise.

Using the 8.2-meter Subaru Telescope on Mauna Kea as part of the Strategic Exploration of Exoplanets and Disks with Subaru (SEEDS) survey, Masayuki Kuzuhara (National Astronomical Observatory of Japan) and colleagues directly imaged an object orbiting at least 44 Earth-Sun distances from its host star, GJ 504, better known as 59 Virginis. The object, GJ 504b, is among the least massive found by direct detection, with between 3 and 8.5 Jupiter masses. What’s more is the planet is relatively blue, which suggests that its atmosphere is relatively cloud-free, akin to a giant, featureless ball of gas. And it is unusually cool at around 500 kelvin (240°C, 460°F).

Currently, the only way to determine the planet’s mass is by comparing its luminosity and age with models that predict how a giant planet cools after its formation. As it ages, a planet or brown dwarf should cool down and become dimmer in the near-infrared wavelengths Subaru observes. Less massive objects will generally cool faster. 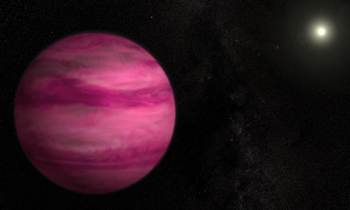 This artist's rendition of GJ 504b shows a glowing, dark magenta exoplanet. Near-infrared observations reveal that the planet's spectrum is "bluer" in the infrared than previously imaged planets, suggesting a clear atmosphere with few clouds.

But an uncertainty in this system is the age of the planet’s host star. The star’s age is important because an older star means the planet has had more time to cool since forming; a difference of a few hundred million years could potentially push the status of GJ 504b from a giant planet up to a brown dwarf. GJ 504 is a G-type star like our Sun located 57 light-years away. While most age estimates place the star between 100 and 510 million years old, one method based on stellar evolution models claims the star is actually several billion years old — a big discrepancy. But that method has been wrong before by up to two orders of magnitude when applied to young stars (which GJ 504 would be if it’s only a few hundred million years old). Moreover, the star’s fast, 3.3-day rotation rate is unlikely for a billion-year-old star.

Eric Mamajek (University of Rochester) predicts that GJ 504 is a “Kraft break” star, with a mass between the slow-spinning G stars and the more massive, fast-rotating F stars. “The combination of metallicity, fast rotation, and bright absolute magnitude argues to me that it is probably a metal-rich F-type wolf in G-type sheep's clothing,” he says.

If the star’s age is closer to the Sun’s age, the object could be a 20-30 Jupiter-mass brown dwarf instead of a planet. But because the object is so dim it could still fit models for a low-mass gas giant. Follow-up spectral studies could confirm whether the planet has a low surface gravity and thus whether GJ 504b’s mass is as low as it seems, or if it’s just a brown dwarf in disguise. If it is indeed nearer to 3 Jupiter masses, this detection is a step towards the direct imaging of fainter, Earth-mass exoplanets. 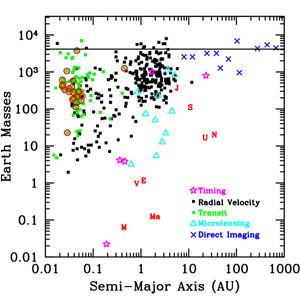 This diagram shows a diversity of exoplanets detected by various techniques. Exoplanet specialist Sara Seager notes that the parts of the diagram without planets surely just represent the lack of technology sensitive enough to detect them. Click the image for a larger version.

The low mass, cool temperature and mild atmosphere of GJ 504b add diversity to the current repertoire of exoplanet atmospheres. Previously imaged planets, particularly those around HR 8799, show signs of thick clouds, and astronomers didn’t know whether these atmospheres represented most young gas giants. While it’s still unclear how cloud formation on such planets might depend on their temperatures and age. “Now we would know that it is possible to have young giant planets at about 500 K temperatures without clouds,” explains exoplanet researcher Nikku Madhusudhan (Yale University). Understanding cloud formation on these planets will help constrain models for exoplanet atmospheres and planet formation and evolution.

Also a mystery is how this planet could form so far from its host star. The traditional core-accretion model of how planets form won’t work at 44 AU, so astronomers are favoring the gravitational instability model, which says that a clump in the disk of gas and dust around a forming star collapses under its own gravity, and then the outer fragments of the disk migrate to the center to form the planet’s core. But if the planet and the star aren’t in the same plane, and GJ 504b is somewhat in front of or behind the star's distance, it could be much farther from its host.

See the press release, or read more in the paper to be published in the Astrophysical Journal.

This report was very good, I compared to some other website reports on GJ 504 b and S&T disclosed more model details and issues concerning the calculations. If an accurate host star mass can be determined and an accurate orbit plotted for the exoplanet, the mass could be worked out using celestial mechanics. I used host star mass 1.22 M_sun, exoplanet mass of 4 M_Jup, a = 43.5 AU, and e = 0.05. The orbital period works out to be about 259.49 years.

There used to be a time when discoveries had human names attached to them. Now a corporation gets top billing. How sad!

"Subaru" is the Japanese name for the Pleiades star cluster and has nothing to do with the car manufacturer. The telescope was named through a public naming competition in Japan.

I have a problem with blue implying cloudlessness.
How bout neptune, blue and cloudy.
Some thing as hot as 460F
has got to have Lots of convection, and with that
condensation with the up welling, hence clouds.

Just to re-iterate regarding the previous reply, "Subaru" does not refer to any corporate naming scheme. Subaru is the Japanese name for the Pleiades. And in fact if you look at the logo for Subaru, for example on the hood of a Subaru car, you will see that it is a cluster of stars --a litle styled drawing of the Pleiades. So both the telescope and the car manufacturer are named after the star cluster. 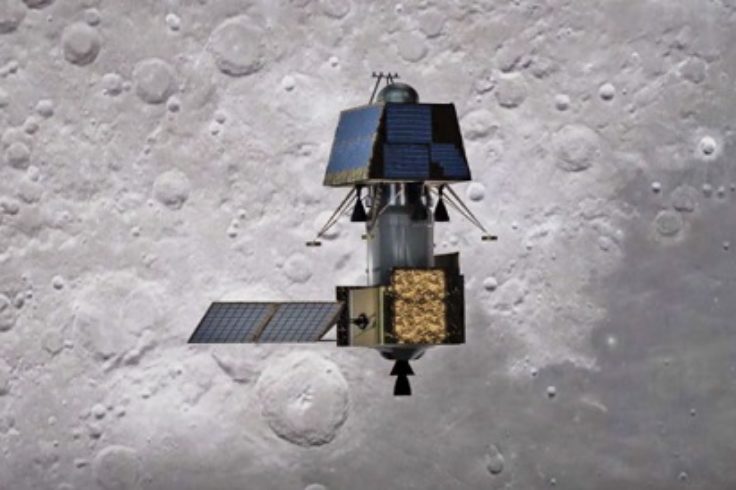