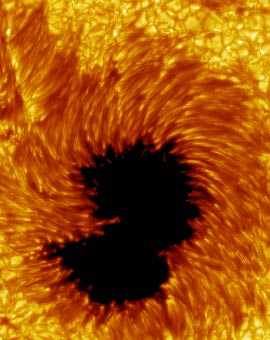 Closeup of a sunspot. This image, taken by the Swedish 1-meter Solar Telescope on La Palma in the Canary Islands, resolves the filaments making up the spot's penumbra with a resolution of 0.1 arcsecond, courtesy of an advanced adaptive-optics system. The original black-and-white images have been colorized here to emphasize contrasts. Click for larger view. Full-size images and movies are on the researchers' web site.

In astronomy, high-resolution images of well-known objects often turn up surprises, and the Sun is no exception. The sharpest-ever pictures of the solar surface, recently obtained with a brand new Swedish solar telescope, reveal a puzzling phenomenon in the penumbrae of sunspots.

A spot's penumbra (its medium-dark outer part) is made of thin, radial filaments of gas, beautifully resolved here. The new images reveal these filaments to have narrow, dark cores, as reported in today's issue of Nature. No one knows how to interpret this discovery.

According to team member Dan Kiselman (Royal Swedish Academy of Sciences), the penumbral filaments, measuring 150 to 180 kilometers wide, are probably magnetic flux tubes carrying hot plasma (ionized gas). But the true nature of the filaments, and how they came to be, remains a mystery. The observed dark core could appear if the interior of the flux tube were cooler than its surface, or perhaps if a narrow river of cooler gas flows on top of each bright filament. But, says Kiselman, since flux tubes are expected to cool from the outside, and since cold gas is heavier than hot gas, both explanations are unlikely. "It’s a bit strange," he says, "and it will put theories to the test." 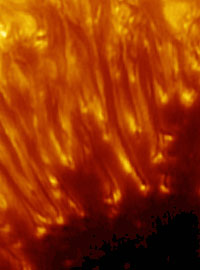 The spectacular photos were made with the Swedish 1-meter Solar Telescope at the Roque de los Muchachos Observatory on La Palma, Canary Islands. The telescope began operations just last spring. Using adaptive optics to correct for atmospheric turbulence, and computer-intensive processing to further enhance image sharpness, the Swedish team, led by Göran Scharmer, achieved a resolution of around 0.1 arcsecond, corresponding to a mere 75 kilometers on the Sun.

According to solar physicist Rob Rutten (Utrecht University, the Netherlands), this is twice as good as Dutch astronomers on La Palma have achieved using speckle interferometry with the 45-centimeter Dutch Open Telescope (DOT). "The advantage of adaptive optics," says Rutten, "is that you can also use it for spectrography and polarimetry," which is exactly what the Swedish team plans to do.

In the United States, the 76-centimeter R. B. Dunn Solar Telescope at Sacramento Peak, New Mexico, has also approached 0.1-arcsecond resolution using adaptive optics, but not over such a wide field of view.

Rutten believes that the penumbral filaments have finally been completely resolved and that there are none smaller. Some solar astronomers had instead expected the filaments to be fractal in nature, with finer and finer ones appearing at ever-smaller scales. But a satisfactory explanation of the observations will probably have to await new numerical simulations, or even more powerful instruments — such as the Japanese Solar-B satellite, due to be launched in 2005, or the proposed 4-meter Advanced Technology Solar Telescope of the U.S. National Solar Observatory. Meanwhile, says Kiselman, "we expect to be in the forefront of solar physics for a number of years to come."