Once in a while you get so lucky it's spooky. In a typical galaxy like the Milky Way, a supernova explodes once every 50 years on average. So what was the chance that the first moments of a supernova would occur while NASA's Swift X-ray satellite happened to be trained on just the right galaxy? 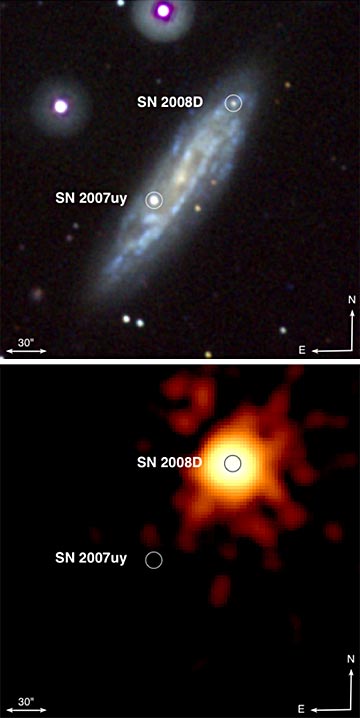 Top: Several days after it erupted in X-rays, Supernova 2008D showed up in visible light — though not as brightly as Supernova 2007uy, which was then several weeks old.

Bottom: Days earlier, while Swift's X-ray camera was aimed at the galaxy, a sudden high-energy eruption flooded the image at the exact same point. By comparison, the earlier supernova was already dark in X-rays.

Today the journal Nature and several dozen astronomers announced just such an event, along with the results of four months of followup observations.

What we are used to calling "a supernova" is really just a supernova's afterglow. A "new star" is seen growing brighter and brighter for 1 to 3 weeks, then fading back down for many months. But this is just the expanding debris shell of a star that actually took only seconds or minutes to blow apart. The debris even shines by a delayed, time-release effect: the slow radioactive decay of nickel-56 that got cooked up in the brief blast itself.

A supernova's actual energy release is pretty much complete even before the blast wave inside the star (moving at a good fraction of the speed of light) gets to the star's surface. After that it's really all over but the shouting.

On January 9th, Alicia Soderberg and Edo Berger (Princeton University) were using Swift's X-ray telescope to observe the fading glow of Supernova 2007uy, which had gone off a month earlier in the galaxy NGC 2770, 90 million light-years away in Lynx. During their observation, an overwhelming X-ray blaze appeared in a different part of the galaxy. It brightened rapidly for one minute, then faded away over the next several minutes.

They quickly alerted other orbiting and ground-based observatories. In the following days, the X-ray blaze turned out to mark the site of a new, ordinary supernova of Type Ibc swelling into view. It was designated Supernova 2008D, since it was the fourth discovered in 2008.

A Type-Ibc blast results when the dense iron core of a hydrogen-depleted, massive but compact blue-giant star (a Wolf-Rayet star) collapses in on itself to form a tiny neutron star or black hole. At least that's what astronomers have every reason to believe. The gravitational energy released by the internal collapse is more than enough to blow the rest of the star to pieces and send its material flying out at a few percent of the speed of light. But the details of how this works are still somewhat mysterious.

For nearly 40 years, astronomers have known that the first visible sign of a core-collapse supernova ought to come when the shock wave from the center erupts through the star's surface. The shock wave should suddenly heat the surface to ultraviolet- and X-ray-hot temperatures and send it expanding out fast. So, a sudden UV and X-ray flare should be a supernova's first observable event (aside from a pulse of neutrinos, and perhaps gravitational waves, from the core collapse itself).

That's what Swift saw. Interestingly, spectra taken soon after showed no sign of jets being emitted near the speed of light — ruling out the possibility that this was a gamma-ray burster that was aimed away from us. A small fraction of Type-Ibc supernovae do produce gamma-ray bursts, but Soderberg and her 37 co-authors find no sign that this blast was anything but round and relatively low-velocity. Their discovery paper appears in the May 22nd issue of Nature.

However, on May 17th a different group of 42 researchers issued its own major paper describing extensive brightness and spectral data on Supernova 2008D, ranging from two hours to nearly four months after the shock-wave breakout. They do find signs (in the late data) that the blast went off asymmetrically.

One theory of what happens in a core collapse is that much of the energy emerges from the core as narrow jets moving at practically the speed of light along the core's axis of rotation. If the jets are powerful enough they punch clean out of the star's poles and send a gamma-ray burst or X-ray flare forward along their line of flight. If the jets are weaker or broader, they may not get out of the star at all but still deliver enough energy to blow it apart in an asymmetric way (see "Supernovae Are Not Round," Sky & Telescope, January 2002, page 40.)

Supernova 2004D may have had the first shock-wave breakout observed in X-rays, but it won't be the last. Says Soderberg, "The next generation of [wide-field] X-ray satellites will find hundreds of supernovae every year exactly when they explode."

And in fact, another satellite recently stole a march. NASA's Galaxy Explorer (GALEX) apparently caught ultraviolet emission following the shock breakout in two supernovae of Type II (core collapses in red-giant stars that still had their hydrogen outer layers). Here's the first of two discovery papers on this; here's the second.

Nature is making a big effort to publicize the Soderberg-Berger paper today, and at many of the co-authors' institutions, the publicity departments are cranking out press releases highlighting their own people's roles. For example: from NASA; from Gemini Observatory; from Penn State (including a lousy movie); from the National Radio Astronomy Observatory; from a bunch more.

So this'll be all over the news by tonight.

Hello, Since NGC2770 is 90 million light years away, does this mean the two supernovae occured 90 million years ago or am I missing some factor in determining how long a nova or supernova's light takes to travel from its source? Thank you, Bill

Astronomers refer to the times of events by when they're seen on Earth. So maybe that should be "four months ago plus about 90 million years."