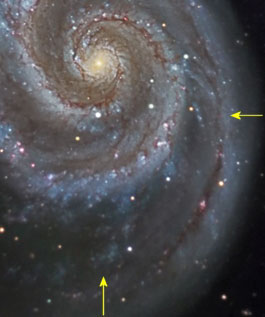 Supernova 2005cs is the bright star at the intersection of the two arrows in this remarkable image of M51, the Whirlpool Galaxy, taken by R. Jay GaBany of San Jose, CA. He used a 12-inch f/9 Takahashi Mewlon 300 telescope and an SBIG ST10XME CCD camera to take 6 hours of luminance exposure and 2 hours each of red, green, and blue exposures from July 1st to 7th.

A 14th-magnitude supernova has appeared in a spiral arm of the Whirlpool Galaxy, M51 in Canes Venatici, high overhead these evenings. Although the supernova is probably too faint for most visual observers, it's well within reach of astro-imagers.

Supernova 2005cs was discovered on June 28th by amateur supernova hunter Wolfgang Kloehr of Schweinfurt, Germany, in a CCD image that he took with an 8-inch reflector. A spectrum obtained on June 30th by Robert Hutchins with the Whipple Observatory 1.5-meter telescope in Arizona showed it to be a Type II supernova: the hydrogen-rich explosion of a giant star whose massive core collapsed to become a neutron star or black hole. Prediscovery images show the supernova at 16th magnitude just a few days before it was spotted. It remained at about magnitude 14.1 as of July 8th. [Update August 24th: The supernova has still hardly changed; it's at about magnitude 14.3.] It's located 78 arcseconds south of the galaxy's nucleus. Take a printout of the photo above with you to the telescope.