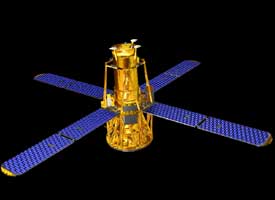 The RHESSI craft has identified continuous X-ray bursts on the Sun.

Results from the first three months of operation of a new orbiting X-ray telescope, the Ramaty High-Energy Solar Spectroscopic Imager (RHESSI), show that solar flares release intense bursts of high-energy X-rays even before the flares begin to brighten in ultraviolet images, and that bursts of X-rays occur almost constantly on the solar surface. The new results, combined with data from other spacecraft such as TRACE (Transition Region and Coronal Explorer), which captures extreme-ultraviolet (EUV) images, are the most comprehensive picture yet of the dynamics of solar flares — by far the most energetic events in the solar system. The initial results were reported on June 5th at the American Astronomical Society meeting in Albuquerque.

Thanks to the new observations, including data from an X-class (highest-energy category) flare on April 21st, "we can determine exactly where and when energy is released in the solar atmosphere, and identify its form," says RHESSI principal investigator Robert Lin (UC Berkeley). That form, he says, consists of plasma heated to tens of millions of degrees, as well as fast-moving electrons from high in the corona that heat up the gases below. "It appears that the bulk of the energy comes out as high-energy particles," Lin says. The most puzzling finding was the fact that the high-energy X-rays arrive before there is any sign of UV brightening. "We expected to see X-rays coming nearly simultaneously with the EUV brightening," adds RHESSI mission scientist Brian Dennis.

So far, more than 100 significant flares have been detected — more than one a day, on average — and much smaller ones occur "every few minutes," Lin says. "While large solar flares are the brightest sources of X-rays, we can now see that active regions crackle and sputter with miniature flares all the time." This unexpected, nearly constant activity may help explain the longstanding mystery of how the Sun's corona manages to be heated to more than 200 times the temperature of the chromosphere, the coolest layer just above Sun's "surface."

The energy source for these 20,000-electron-volt emissions is thought to be electrons slamming into dense gases at the base of the corona, apparently after being accelerated by the sudden collapse of stretched magnetic field lines, rather like the snap back from suddenly cutting a stretched rubber band.

Although RHESSI launched two years after the expected peak of this solar cycle, the instrument is so sensitive that Lin says he expects it will continue to produce useful data "all the way into solar minimum."