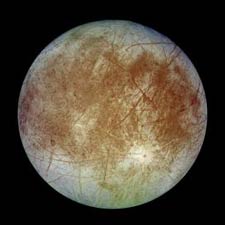 Surface features of Europa's ice shell and the presence of a magnetic field have led scientists to believe that an ocean is likely present on the Jovian moon today.

Europa's icy shell is scarred with a crazy-quilt pattern of cracks and grooves, and beneath that outer layer of ice hides a global ocean. What sort of life may be swimming there? Answering that question partly depends on the flavor of the water.

Earth's oceans are full of minerals that have shed into the water from the erosion of rocks or from volcanic eruptions. Chloride and sodium are the primary solutes, and give our ocean its distinctive salty taste. Europa's ocean, too, is believed to be salty. Is it just like Earth's ocean, or does it have its own unique recipe based on different ingredients?

"The reason for that is, if you take a bunch of chondrites
— space rocks — and crunch them all together to form a planet or a moon, as we think occurred around the Jovian system, the dominant cation and anion that come out of that leached material is magnesium and sulfate," says Hand.

He says that while scientists have seen evidence for the sulfate — the anion or negatively-charged ion — in spectroscopic measurements of Europa's surface ice, they have not been able to discern what the dominant positively-charged cation is. There is debate over whether that cation really is magnesium, or if it could instead be sodium, as it is on Earth. It may even be hydrogen — there is a lot of hydrogen available in the Jovian system (the planet Jupiter is 90 percent hydrogen), and hydrogen is available on the surface of Europa. If that's the case, then Europa's ocean could be a searing cauldron rather than a placid sea — hydrogen combined with sulfate creates sulfuric acid. 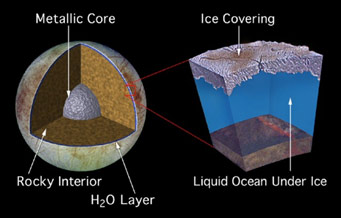 A model of Europa's interior, including a global ocean. If a 100 kilometer-deep ocean existed below the Europan ice crust, it would be 10 times deeper than any ocean on Earth and would contain twice as much water as Earth's oceans and rivers combined.

Brad Dalton of NASA's Ames Research Center says his research suggests the salts on the surface ice of Europa may be as much as two-thirds sulfuric acid. However, that could be due to radiation from Jupiter's magnetosphere altering the ice, rather than evidence of a sulfuric acid ocean.

If the sulfate on Europa's surface ice was due to ocean water coming up through the cracks, you would expect to see the spectral signature of the sulfate right along the center of the cracks. But Hand says the highest resolution spectra show the signature is stronger on the outer flanks of the lineae (crack features). What may be occurring is the sulfate material develops at the top of the lineae as high energy particles from Jupiter bombard the surface of Europa, and then the newly formed sulfate sloughs off of the sides. 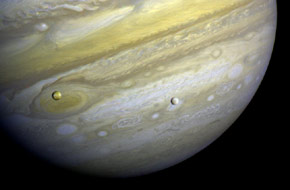 In this false-color close-up view from the Voyager 1 spacecraft on February 13, 1979, Jupiterâ€™s moon Io hovers above the planetâ€™s Great Red Spot while Europa hangs in the foreground to its right. The moonsâ€™ disks are not as clearly seen from Earth. Nevertheless, a host of unusual observations can be made whenever two moons line up precisely with Earth or the Sun.

Europa's surface ice chemistry is further complicated by the neighboring moon Io. This volcanic moon is constantly spewing particles into space, and those particles become trapped in Jupiter's rapidly rotating magnetosphere.
Europa is continually bathed in this charged ionic stew.

"Io contributes sodium, sulfur, chlorine, and other ions to Europa's surface," says Dalton. "These charged particles, along with electrons and protons from hydrogen ions, stimulate chemistry in the surface material and have probably altered the chemical makeup."

Europa's ocean still could be adding its own salts to the surface ice, says Hand, because scientists have shown the ice has more salt than can be explained by just radiolytic processing and Io's contribution. To determine the ocean's chemistry from remote spectral data, scientists would need to tease out that native source of salt from the other salts present on the surface. However, another complication is that, over long time scales, the ocean and the surface may exchange material thanks to the cracking and shifting of the ice shell.

"Right now many people think the spectra on Europa may be best matched by a one-third mixture of magnesium, sodium, and hydrogen as cations," says Hand.

Even if scientists can piece together the complex story of the outer ice shell, that won't eliminate the uncertainty about Europa's ocean. Geologic processes deep down on the ocean floor could alter the ocean's chemistry. That certainly happens on Earth, and one such instance involves the magnesium content of our ocean. River water that eventually drains into the sea tends to be richer in magnesium than ocean water. This disparity is due to tectonic activity, which, as it sucks ocean water beneath the planet's crust, tends to pull magnesium out of the water. Hand says that if Europa has similar hydrothermal activity — and many scientists think it does — then the magnesium level of Europa's ocean should be much lower than expected from the chondrite models. 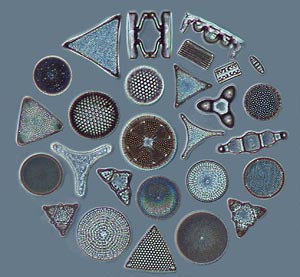 Diatoms are a type of eukaryotic algae with cell walls made of silica. Their ornate body forms can be quite diverse, but most consist of two asymmetrical sides with a split between them. Most diatoms are single celled, but they can form chains or colonies.

Life greatly alters the Earth's ocean chemistry, because various organisms use elements in seawater for their own purposes. Calcium is drawn out of the ocean to build the shells of clams and other mollusks, while diatoms and other microorganisms pull out silica from the water to construct their cells. In this way, organisms on Earth deplete the water of certain elements by binding them up into solid form.

We do not know if Europa's ocean contains marine organisms, but an ocean potentially rich in sulfuric acid doesn't seem like a good place for life. Dalton points out, however, that there are sulfur-metabolizing microorganisms on Earth which may be able to survive in such an environment.

The amount of salts in the ocean also could be stressful for life. Hand says the Galileo magnetometer results indicate Europa's ocean could be nearly saturated in either sodium chloride or magnesium sulfate.

"If you've got a salt-saturated ocean, that doesn't bode well for the origin of life," says Hand. "Some of the processes that lead toward the generation of polymers or the stringing together of genetic base pairs are inhibited by high salt concentrations. That said, there are terrestrial halophiles, salt-loving microbes, that could survive in the ocean we propose."

Even though Hand believes hydrogen has an edge on the other cations, resulting in an ocean potentially rich with sulfuric acid, he says the cracking and shifting of the outer ice shell could produce a very different type of ocean. Such resurfacing processes may encourage hydrogen to escape out into space, resulting in an alkaline ocean, one that is dominated by sodium and calcium sulfates or carbonates. If so, then Europa's ocean would be similar to soda lakes on Earth, such as Mono Lake in California or the springs in Africa's Rift Valley, and perhaps akin to what the ocean was like on the early Earth.

To know exactly what Europa's ocean water is like, we'll need to send a mission there designed to pierce through the ice. Scientists don't agree on how thick that ice shell is, but it likely varies a great deal from one place to another. Hand says the best fit to the Galileo data suggests an average thickness of 4 kilometers.

"That's comparable to the Antarctic ice sheet, and we're boring down through that now on our way to Lake Vostok,"
says Hand. "That may be comparable to what we'll need to do on Europa. Then in 2015 hopefully we'll launch the Europa Explorer mission, which could include a lander. That would help us resolve some of these big questions in much greater detail."