Taking a Right Turn in Albuquerque

In my April 1999 Star Trails column in Sky & Telescope, I wrote an open letter to my 1-year-old granddaughter, Summer. Since then a lot has happened, and Summer is currently enjoying 5th grade, while her brother, Matthew, is beginning his own quest for life as a first grader. Last week I had the honor of speaking to both of their classes, as well as presiding over a special International Year of Astronomy (IYA) event at their school. 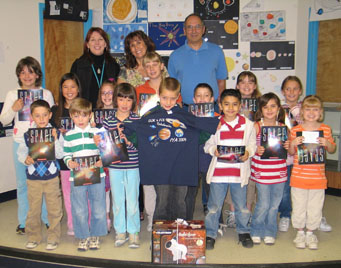 In addition to a quiet family visit, my wife, Wendee, and I travelled to New Mexico to help our daughter Nanette complete her own effort for the IYA. Her idea was to encourage students at Georgia O’Keefe Elementary School in Albuquerque, to come up with projects, especially those that dip into history, relating to the IYA. It started last fall, when she proposed an essay-writing contest that involved books the student had read about astronomy. “My plan,” she said, “was to keep them excited about the contest throughout the month.” She was wildly successful. In addition to the competition, the month was filled with a series of class-sized activities, salted with visits from members of the Albuquerque Astronomical Society who helped the student observe the Sun. Last week I presented awards to the writers of the winning essays in each grade.

So who were the winners? Everyone! Each girl and boy who participated in this inspired project was a winner. The competition itself was designed to expose the young students to the rich history we have in astronomy. Of the 78 projects that were successfully completed, the ones that meant the most to me gave an impression of the huge size differentials within our solar system. How can we imagine the vastness of our world, when a child can tell us that it is tiny compared to mighty Jupiter? While we gather this information in classrooms and digest it after school, we have no real conception of what it means.

We got to see projects that explained the planetary content of the solar system, including Pluto (which, according to the New Mexico legislature, is still a major planet), and welcoming Ceres and Eris as dwarf planets. Some of the artwork included black holes, which can be small enough to be contained within a planetary system. One project even recalled, in lively artwork, the travels we made to the Moon so long ago that they’re now part of history.

The awards presentations were only part of the day. While visiting my grandson’s first-grade class, I tried to bring Galileo’s story to life by staging a small drama about the Italian scientist's struggle to popularize the telescope, its discoveries, and the consequences he faced afterwards. I ended my morning with a visit to Summer’s fifth-grade class. I introduced the subject of life on other worlds, and the inquisitive students took it from there, engaging themselves in a conversation about how common life should be in our galaxy. They may all be correct in their diverse views, or all wrong; I don’t care. That they were very much engaged in their discussion, however, was precious.