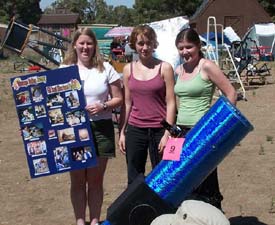 Clear, dark skies and beautiful spring weather greeted the more than 1,600 stargazers who attended the annual RTMC Astronomy Expo (formerly the Riverside Telescope Makers Conference) near Big Bear City, California, last weekend. Hundreds of telescopes were on display and in use, with stunning views of the solar system and the universe always within arm's reach — or within a few steps up a ladder to the eyepiece of a giant Dobsonian reflector.

"We were very pleased with the increased numbers of astronomical spouses and children we had at the Expo this year," says event organizer Stephen J. Edberg. "We actually needed more family dorm space, which is a very good indicator, and we will adjust accordingly next year. The more kids we have present, the more chance we have of drawing them into the hobby. That's why we have the Beginner's Corner and astronomical activities for children." Activities such as swimming, canoeing, archery, and horseback riding rounded out the daytime family entertainment. 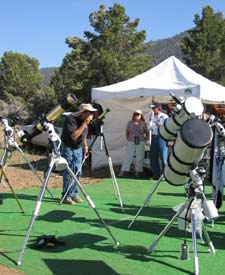 Hundreds of telescopes filled the YMCA's Camp Oakes outside of Big Bear City, California, at this year's RTMC Astronomy Expo.

This year's theme was "The History of Astronomy," and captivating lectures covered topics ranging from the histories of the Lick and Mount Wilson observatories to Isaac Newton's telescope innovations. Keynote speakers Todd and Robin Mason, both documentary filmmakers, gave a presentation on the technological challenges of building the 200-inch Hale telescope on Palomar Mountain as well as a 10-minute preview of their upcoming PBS documentary, "The Journey to Palomar." Other highlights included staples such as astrophotography workshops.