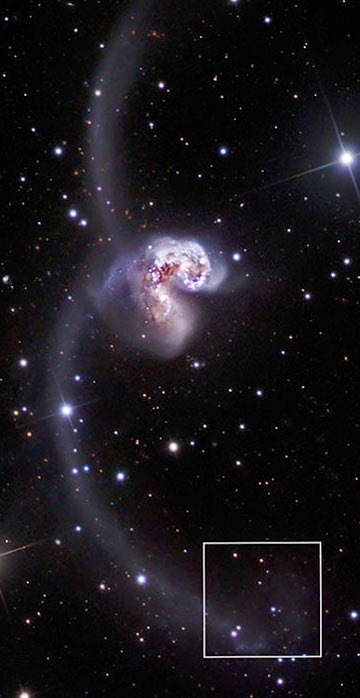 This wide-field view (shot by a skilled amateur!) shows the long tidal tails pulled from the Antennae galaxies as a result of their gravitational interaction so far. The box at the bottom shows the field of the Hubble image below, which (in its full-resolution version) resolves thousands of individual giant stars. Click image for higher-resolution versions.

A bedrock problem in astronomy is simply figuring out how far away things are. Practically everything else about an object — its true size, its energy output — all the stuff you have to know to understand it — depends on simply knowing how far away it is. And even now, the poor quality of many astronomical distances remains a nagging problem.

In the 18th and 19th centuries, the great distance problem was the scale of our own solar system. The astronomical unit (the mean distance from the Earth to the Sun) was the yardstick on which all else depended, and astronomers expended heroic efforts to find the length of this yardstick.

Today we know the astronomical unit to ten digits, thanks to the tracking of space probes and radar-echoing of planets. That's like knowing the distance from a point in San Francisco to a point in Boston to better than an inch.

In the 20th century, the epic distance-quest was to find the Hubble constant: the rate at which the universe is expanding. This tells how far away distant galaxies are, based on their redshifts. Now, thanks to the Wilkinson Microwave Anisotropy Probe (WMAP) combined with many other lines of evidence, we've pinned down the Hubble constant to within about 2%.

But galaxies relatively nearly — the very ones we can study best! — have low redshifts. This means the redshift method doesn't work well for them. The overall redshift is liable to be thrown off quite a bit by the galaxy's own, individual random motion through space (its peculiar velocity), resulting in a bad distance. Instead, distances to moderately nearby galaxies are best measured by analyzing individual stars within them — Cepheid variables, red giants, and other good indicators — when this is possible. This was a major reason why the Hubble Space Telescope got built. 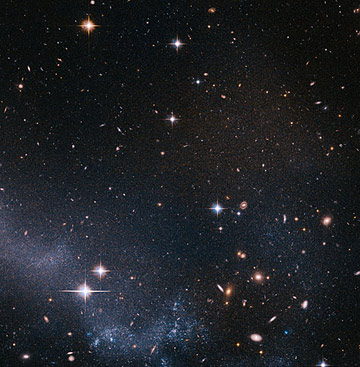 Thousands of giant stars are resolved in this far-outlying patch of one of the Antennae galaxies' tails. The brightness of the brightest red giants here has redefined the Antennae's distance. Click image for high-resolution views. And here's an earlier Hubble image of the main colliding galaxies themselves.

This morning, Hubble scientists announced a new such result: for the iconic Antennae galaxies. The Antennae are a spectacular colliding pair in Corvus, NGC 4038 and NGC 4039. They are the nearest major colliding pair. They're visible in medium-large amateur telescopes as an interesting little 11th-magnitude smudge, well-placed in the evening sky at this time of year.

This matters. As a NASA / European Space Agency press release tells it:

"The previous larger distance required astronomers to invoke some quite exceptional physical characteristics to account for the spectacular system: very high star-formation rates, supermassive star clusters, ultraluminous X-ray sources, etc. The new smaller distance makes the Antennae Galaxies less extreme in terms of the physics needed to explain the observed phenomena. For instance, with the smaller distance its infrared radiation is now that expected of a 'standard' early merging event, rather than that of an ultraluminous infrared galaxy. The size of the star clusters formed as a consequence of the Antennae merger now agree with those of clusters created in other mergers, instead of being 1.5 times as large."

Read the whole press release and check out the pictures. (And here's a fantastic earlier Hubble picture of the central collision itself.)

If you are willing to buy a house, you will have to receive the loans. Furthermore, my father usually utilizes a car loan, which supposes to be the most fast.