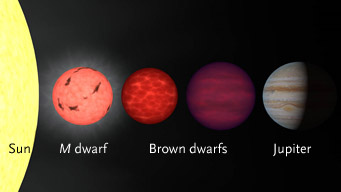 Compared to the Sun, stars known as M dwarfs are relatively cool, and brown dwarfs of type L and T are even cooler. Astronomers now think they've found two examples of an even cooler object, type Y.

But two teams of astronomers believe they've turned up what may be the first known examples of a new spectral class of stellar-mass objects with surfaces no hotter than a cup of coffee. As such, they'd fall in the temperature gap between the coolest known brown dwarfs (440°F; 225°C) and Jupiter (-190°F; -125°C). One of the newfound objects has an estimated temperature of 80°F — nice shirtsleeve weather!

"I think it's pretty neat to find a 'star' that could have a temperature similar to that of Earth," says Kevin Luhman (Penn State University), who led one of the observing teams. Luhman and two colleagues used NASA's infrared Spitzer Space Telescope to study WD 0806-661b, the companion of a faint white-dwarf star 63 light-years distant in the southern constellation Volans.

WD 0806-661b emits only very feeble infrared emission at wavelengths no shorter than 4.5 microns. Luhman's team bases the 80°F estimate on the observed infrared brightness and the inferred age of the white dwarf. If those are correct, this object would have about 7 times the mass of Jupiter.

Even if its temperature is nice, WD 0806-661b is not exactly habitable. It's a gaseous body with no surface, and even in the gondola of a balloon you'd be squashed flat by a gravitational force of about 15 g. 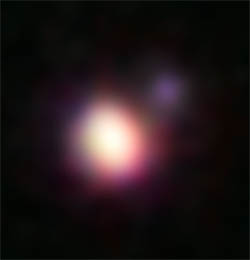 Observers using the Laser Guide Star (LGS) Adaptive Optics system on the Keck II telescope recorded this composite infrared image of the brown dwarf binary designated CFBDSIR J1458+10. The fainter component is a candidate for the brown dwarf with the lowest temperature ever found.

The other group, led by Michael Liu (University of Hawaii), identified a very cool brown dwarf orbiting a slightly warmer brown dwarf in Leo. From their near-infrared spectroscopy, Liu and eight colleagues estimate that the cooler member of the pair, CFBDSIR J1458+1013b, is roughly 200°F (95°C). Its mass probably falls between 6 and 15 Jupiters.

Those of you familiar with the ruch of recent exoplanet discoveries are probably thinking, "Hey, aren't these really just supersized Jupiters?" Perhaps — by one unofficial but widely used cosmic yardstick, the transition between "planet" and "brown dwarf" occurs at about 13 times the mass of Jupiter.

"Once we start taking images of gas-giant planets around Sun-like stars in the near future," comments Liu, "I expect that many of them will look like CFBDSIR J1458+10b."

But if these two objects really are ultracool brown dwarfs, then they're likely the first members of a proposed new stellar spectral class. For nearly a century astronomers have classified most stars by their spectra, using the letters O, B, A, F, G, K, and M for those hottest to coolest. In the last 15 years astronomers have added two more classes, L and T, for even cooler, dimmer dwarfs. But theorists predict that any T dwarfs dipping below 450°F (230°C) should start losing some spectral features and start showing spectral evidence for ammonia and water clouds. In 1999 Caltech astronomer Davy Kirkpatrick proposed to name these objects spectral class Y.

Astronomers haven't yet obtained good enough spectra of either object to observe such features. So for now, they're only candidates for this new spectral class.

Has anyone extended the mnemonic to these new dim spectra? How about:

OBAFGKMLT -Oh, Be A Fine Girl, Kiss Me for the Last Time.

How about Oh Boy! A Fine Girl Kissed Me Last Tuesday! Yowzers!

How about Oh Boy! A Fine Girl Kissed Me Last Tuesday! Yowzers!

Oh Be A Fine Guy/Girl Kiss Me Lovely Tempter!

Oh Be A Fine Guy/Girl Kiss Me Lovely Tempter!