The Deepest Photo Ever Taken 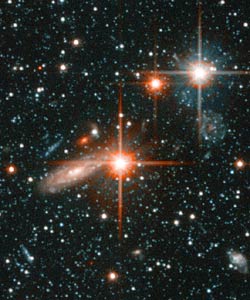 In this detail from the deep ACS image, a few bright Milky Way stars in the foreground set off swarms of faint stars in the halo of M31 and galaxies far beyond.

Astronomers using the Hubble Space Telescope's powerful new Advanced Camera for Surveys (ACS) have taken the deepest visible-light image ever made of the sky.

The 3.5-day (84-hour) exposure captures stars as faint as 31st magnitude, according to Tom M. Brown (Space Telescope Science Institute), who headed the eight-person team that took the picture. This is a little more than 1 magnitude (2.5 times) fainter than the epochal Hubble Deep Fields, which were made with the Hubble's Wide Field and Planetary Camera 2. It is 6 billion times fainter than what can be seen with the naked eye. 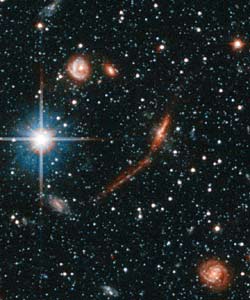 Extremely distant galaxies, seen in earlier ages of the universe, tend to be more irregular and collision-prone than the galaxies we see nearby in the universe of today.

Brown and his colleagues chose to point at a spot 1° southeast of M31, the Great Andromeda Galaxy, in order to get a census of faint stars populating M31's outer halo. The full ACS image is about 3.1 arcminutes square, the size of a sand grain held at arm's length against the sky. The ACS magnifies this small field into a vast panorama of some 300,000 stars and thousands of faint background galaxies. At M31's distance of 2.5 million light-years, the faintest of the stars are slightly less luminous than our Sun. A large fraction of the most distant galaxies appear patchy and irregular, testimony to the collisions and mergers in the early universe that built up the familiar galaxies we see closer around us today. 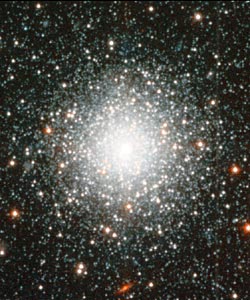 Not long ago this would have been considered an excellent picture of one of our own Milky Way galaxy's globular clusters. But it's actually a globular of M31, about 100 times farther away, that happened to be in the ACS field.

Most of the stars in the image indeed proved to be in M31's halo, judging from their colors and brightnesses. Moreover, they show a surprisingly wide range of estimated ages — from 6 to 13 billion years, compared to 11 to 13 billion years for our Milky Way's halo stars. Perhaps M31 has captured and torn apart younger dwarf galaxies than our Milky Way has done. Or perhaps M31 underwent a massive, disruptive merger with a single large galaxy billions of years ago; in this scenario some of M31's younger disk stars could have been flung into its halo. Or maybe some combination of these events triggered waves of star formation in regions that ended up in M31's outer fringes. 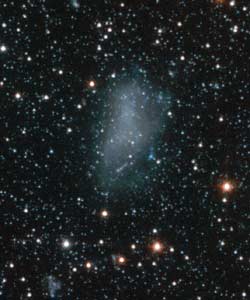 A dim, irregular dwarf galaxy in the background of M31.

The image was made in two colors: near-infrared and "visual" (a band spanning the part of the spectrum running from yellow through green). The renditions displayed here were crafted to resemble true-color views by interpolating from these two colors. These vignettes each show only about 1 percent of the ACS image. The full image is available from the Hubble Telescope's press site at various qualities and sizes (up to 128 megabytes), along with more highlights and a finder chart showing its relation to M31.

Plans are afoot for an even deeper "Ultra-Deep Field," which will use ACS for longer exposures in four colors and go slightly fainter still.