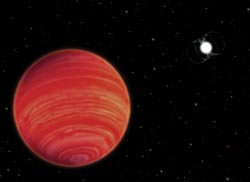 A dim, Jupiter-size object orbiting a white dwarf seems to be the last remaining bit of an eroded star's core.

Deep in Eridanus is a 17th-magnitude white dwarf that occasionally brightens to magnitude 14.5, as tracked by amateurs in the American Association of Variable Star Observers. EF Eridani is a cataclysmic variable: a close binary star with eruptions triggered by gas falling onto the white dwarf from a companion object. Researchers say this particular system seems to be a rare case where the companion has been almost completely eaten away, leaving just a dim core with a substellar mass — a strange, worn-out sort of brown dwarf.

EF Eridani has been in its "low" state, between outbursts, since 1997. Apparently the white dwarf is receiving only the barest trickle of gas from the close-orbiting companion. Thomas Harrison (New Mexico State University) and five colleagues recently used the giant Keck II and Gemini North telescopes to take infrared spectra of the system, hoping to catch signs of the mysterious companion object. They barely succeeded.

Most of the infrared emission from the system turned out to be cyclotron radiation coming from electrons spiraling down to the magnetic poles of the white dwarf, which has a magnetic field 14 million times stronger than the Sun's. Almost hidden by this emission were a few spectral signs indicating radiation from the dim companion object. It seems to be a cool (1,700° Kelvin) brown dwarf with about 50 Jupiter masses and a strange composition, suggestive of old stellar-core material rich in nitrogen and depleted of carbon and oxygen.

Ages ago, the companion was presumably a normal star that began overflowing its gravitational domain in the binary and spilling a stream of matter onto the white dwarf, which probably blew it off in a series of nova outbursts. Now the system has almost reached the dead-end state that many cataclysmic binaries will finally settle into — when the donor star gets whittled down to substellar mass, ceases generating heat to drive the transfer of mass, and is left hanging in a fast, close orbit as it cools.