The Dwarfs are for the Dwarfs

Two teams have announced the detection of a distended galactic satellite associated with NGC 4449, a faint but actively star-forming dwarf galaxy in Canes Venatici, near the Big Dipper. Astronomers first reported a suspicious stream of stars near NGC 4449 in 2007, but the new papers — one in the February 9th Nature and the other appearing in an upcoming issue of the Astrophysical Journal Letters — definitively map the object. NGC 4449 and its buddy, which is also a dwarf galaxy, are about 12 million light-years away and are both members of the Local Group, the collection of about 50 galaxies and dwarf galaxies to which the Milky Way belongs. 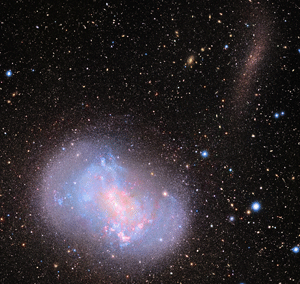 The dwarf galaxy NGC 4449 (lower left) and its companion (upper right) appear to advantage in this composite image. The satellite has been gravitationally pulled apart into a stellar stream, and its older, red stars starkly contrast with the blue hues of NGC 4449's burst of recent star formation.

The satellite, NGC 4449B, is somewhat S-shaped and looks like it’s recently had a close encounter with NGC 4449. (By recently, I mean within the last billion or so years.) NGC 4449B is in the midst of being torn apart by NGC 4449, much as the Sagittarius dwarf galaxy is suffering a prolonged rending by the Milky Way. In fact, NGC 4449B may be causing its big brother’s starburst activity.

In the composite image at right, created by amateur astronomer R. Jay GaBany from images taken with the Subaru Telescope on Mauna Kea, the satellite appears as a dim swath of red stars. The stars are old enough that they’ve stopped fusing hydrogen in their cores. GaBany collaborated with the ApJL team to confirm the satellite’s existence and is a coauthor on their paper.

4449 isn't in our Local Group, and thankfully it's not listed on the Local Group page to which you posted the link. 12 mly puts it way past the margins of our galaxy group.

I had to check my astronomy book for how large is our Local Group. It said 4 mly. So 12 mly isn't within the local group, but not that far away either.

I also enjoyed the article's title since I recognized it as a quote from Chronicles of Narnia by CS Lewis, specifically from the 7th and final book The Last Battle.

The full-sized image at is breathtakingly beautiful. In addition to this nearby dwarf galaxy and the shrunken husk of its prey, there are a couple of well resolved more distant spiral galaxies to the right of the husk. And to the left of the 4449B, is that an elliptical galaxy or a globular cluster?

I guess I'm not the only one to recognize title's origin. I find it interesting that I just read this a couple of hours ago which was at least my 7th reading ot the Chronicles of Narnia. The full reference is to Griffle the dwarf stating, "The dwarfs are for the dwarfs. We will not be taken in again!" When confronted by obvious proofs that the Great Lion Aslan was real.