The Great Daylight Comet of 1910

Exactly 100 years ago this week, a comet of almost unrivaled brilliance burst onto the celestial stage. The comet's approach had been masked in daylight until its growing luster pierced the light of dawn, outshining Mercury at its brightest and unfurling a gossamer tail against a azure twilight sky.

It's unclear who discovered this interloper, though the first to spot it might have been diamond miners in South Africa before dawn on January 12th.

In any case, beginning on January 17th and continuing for several days, the Great Comet of 1910 blazed out in yet more dramatic fashion at midday — even though it was situated in the sky a scant few degrees from the Sun itself! To the unaided eye the comet appeared as a brilliant, starlike body, much as does Venus in daylight but easily five times brighter than Venus at its brightest! Throughout the world observatory meridian circles and other telescopes turned skyward in the unaccustomed light of day to examine the extraordinary sight. Telescopically the comet showed not only a bright and fan-shaped head but also a short curving tail projected against the bright blue sky.

By January 20th the comet had begun to enter the Northern Hemisphere's evening twilight as it moved northeastward. It shown brighter than Venus, together with a tail that could already be traced 10° despite the Sun's dying glow. With telescopes this appendage resolved into two bright, diverging, branches that extended well beyond the edges of the eyepiece field.

Even as the magnificent visitor began to fade, perhaps down to zero magnitude by the 26th or 27th, each evening it climbed higher in the western sky and its tail grew ever longer. By the final week in January the comet's stunning, slightly curving, tail had attained an extent of 25° and grown in width as well.

The absolute peak of the comet's grandeur came in the very last days of January and the first few of February. It was by then situated near the westernmost border between Aquarius and Pegasus, a little southwest of the bright star Enif. Now unfettered by any glow from evening twilight, the Great Comet's head shown like a small, white, dense nebula of 3rd magnitude. Almost straight up from the head extended an incredible, bright, gently curving, 50°-long tail whose terminus melded with the outer regions of the evening zodiacal light. 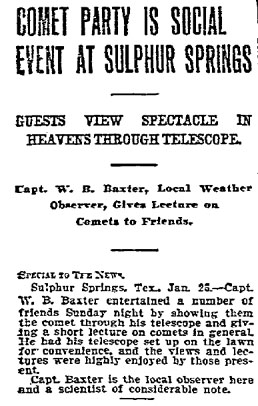 A report of a comet-watching party made the social pages of the Dallas Morning news on January 26, 1910.

So awe inspiring was the scene that, reportedly, thousands of persons in Portugal flocked to the coastline to view it, the religious repeatedly crossing themselves out of fear as they beheld the unworldly apparition suspended before them in the firmament.

Even as late as the end of the first week of February, with the comet's head having by then faded to about 4th or 5th magnitude, observers were still reporting some 20° of ghostly tail visible to the unaided eye. It was an amazing coincidence that this daylight comet appeared just a few months prior to widely anticipated return of Comet Halley in the springtime skies in 1910 — and therein lay a rub.

Let's fast-forward to 1985-86, when Halley's Comet once again graced our skies: Quite a number of elderly folks came forward claiming vivid memories of seeing this comet during its 1910 visit. However, Halley's spectacle was far better seen from the Southern Hemisphere just prior to dawn, rather than in the northern evening-sky show of the earlier comet. For those aging individuals who could recall their sightings in some detail, many of them turned out not to have viewed Halley's Comet at all! Rather, they had instead witnessed the Great Daylight Comet of 1910.

A veteran observer with thousands of comet observations to his credit, John Bortle authored Sky & Telescope's Comet Digest column from 1977 to 1996.