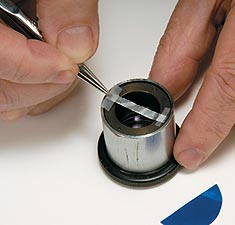 An eyepiece with an occulting bar is not readily available commercially, so you need to dd a bar as a temporary modification to a normal eyepiece. A narrow strip of aluminum foil works well, as does a strip of deep-blue or violet Wratten gelatin filter.

Have you ever seen Mars's moons, Phobos and Deimos, in your telescope? For a brief window from December 2007 into January 2008, conditions for glimpsing the fleet orbs are relatively good. But you'll need a big telescope, and don't expect an easy time of it even so!

Your chances of success go up the closer you observe to December 18th — the date of Mars's closest approach to Earth this orbit. Deimos is then as bright as magnitude 12.8, and Phobos is even brighter at 11.7. Either moon would be a cinch to spot in a 6-inch telescope if only brilliant Mars were not so close to them in the sky.

It's always best to try for the moons near an eastern or western elongation (maximum separation) from the planet. At such times Deimos can be found three Mars diameters from the planet's limb, and Phobos one diameter from the limb. Phobos may be physically larger and brighter than Deimos, but Mars still outshines it by 200,000 times, and that makes this inner moon much harder to discern. 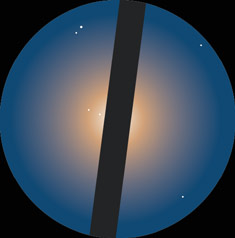 Because Phobos and Deimos lie roughly east or west of Mars at their greatest elongations, rotate the eyepiece so that your homemade occulting bar runs roughly north-south. Then try to spot the dim moons in the planet's background glow. Here, they're both to the left of the bar, at center.

Unfortunately, the early observers' trick of putting Mars just outside the field of view does not work well with today's eyepieces, which have much wider apparent fields than those of yesteryear. The moons themselves would be way off to the side, near the same edge of the field hiding Mars. What you really want is for Mars to be near the field's center but hidden behind a small obstruction, leaving only the moons in view. This can be done with an occulting bar that extends at least halfway into the field, or perhaps completely across it.

As far as we know, you can't buy an occulting bar. But a temporary one is easy to contrive from a piece of a wire or a narrow strip of aluminum foil. Most eyepieces have a field stop — a circular metal ring — at the focal plane. The ring's inner edge is the edge of the eyepiece's field of view.

The idea is to attach your occulting bar to the field stop (a bit of Scotch tape does the trick), and then, while you look in the eye end of the eyepiece, nudge the occulting bar into sharp focus with a pencil point. A fuzzy bar is no good for hiding Mars.

In the telescope, since the moons lie more or less east or west of Mars at their greatest elongations, turn the eyepiece so the bar runs north to south.

"I've found that a deep-blue or violet Wratten gelatin filter works equally well, if not better," writes Stephen James O'Meara. "Trim the filter to a semicircular shape and mount it in the eyepiece's focal plane so it masks half the field of view. Since Mars will shine dimly through this mask, you can more easily judge the distance and direction from the planet where you should look for each moon. Keeping the planet behind the mask is also easier, especially if the telescope has an imperfect drive or no drive at all."

On August 29, 2003, at 5:39 Universal Time, Arizona astrophotographer James McGaha captured these images of Mars and its tiny moons Phobos and Deimos using a ToUcam webcam on a 0.9-meter (36-inch) reflector atop Kitt Peak. To pick up the faint moonlets, McGaha had to overexpose the planet (left), so he made a composite (right) to show all three objects well.

All observers agree that high magnification, excellent seeing, and clean optics are essential for glimpsing the moons. But a high-power eyepiece has the smallest lenses and other parts, greatly complicating the installation of a homemade occulting bar. An easier option is to add one to a low-power eyepiece, then team it up with a Barlow lens to boost the magnification.