To the casual telescopic observer, the spiral galaxy NGC 6744 in the far-southern constellation of Pavo, the Peacock, might appear as a hazy cloud roughly two-thirds the width of a full moon. Even a small backyard telescope can probably reveal a hazy oval disc with a bright center. A beefier scope might harness more of the 30-million-year-old light to reveal spiral arms draped around a bright, dusty nucleus. 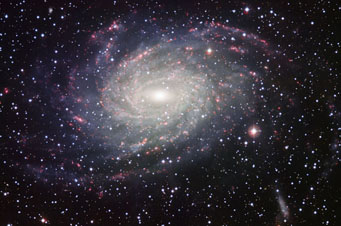 A detailed face-on view of NGC 6744, taken by the MPG/ESO's 2.2-meter telescope at the La Silla Observatory in 2000, was resurrected from the archives recently. The spiral galaxy is considered similar to the Milky Way in many ways, one of them being the presence of a companion galaxy seen in this picture as a smudge at the lower right corner. In this image north is to the right. Click above to see a larger image

NGC 6744 has long been touted as a twin to the Milky Way. The European Southern Observatory (ESO) has now added a highly detailed, face-on view that gives us an idea of what the Milky Way might look like to alien telescopes trained on our galaxy from afar.

A blotch of light at the lower right of the image even shows a companion dwarf galaxy reminiscent of the Large Magellanic Cloud. Also the swarms of red star-forming regions that adorn NGC 6744’s arms resemble those likewise seen dotting the arms of the Milky Way. 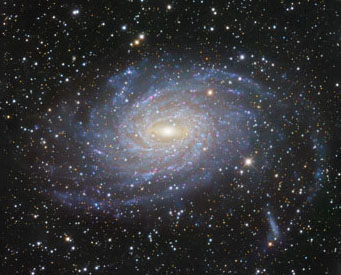 Astrophotographer Robert Gendler took this picture of NGC 6744 in 2008. Click on the image to see a larger view.

To capture this sweeping view, astronomers used the Wide Field Imager of the 2.2-m telescope at La Silla Observatory in Chile. "We weren’t looking for a Milky Way look-alike," said Richard Hook, the facility’s public-information officer. Instead, he explains, they stumbled upon the image when looking through ESO’s archives from the year 2000 for pretty pictures to make public. "The pictures have been sitting around for quite a while!" he said.

It is also worth noting that this galaxy has always been a favorite among astrophotographers. And in the last decade, some of them have captured the spiral in as much glory as the archived ESO image.

While there is much to be excited about, Hook cautioned that the two galaxies are more like fraternal twins than clones — they have their distinct differences. NGC 6744 is probably twice as wide as our galaxy and contains fewer stars. Also, while both are barred spiral spirals, the Milky Way (classified SBb) probably has more open arms than NGC 6744 (SBbc).

Still, this is how close to seeing what our galaxy might look like to distant eyes. So if you are lucky enough to live in or travel to the Southern Hemisphere, do train your telescope on Pavo, and by all means take some time to observe the Milky Way’s near-identical twin.