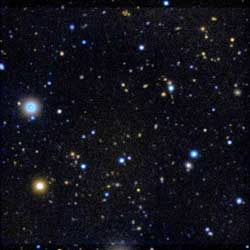 Many of the faint stars in this image belong to the newly discovered Ursa Major dwarf galaxy. The 5-by-5-arcminute image, taken with the 3.5-meter telescope at the Apache Point Observatory, covers the inner half of the galaxy.

The Milky Way's family has just grown a little bigger. By teasing out a loose congregation of faint stars in Ursa Major, a team led by Beth Willman (New York University) has discovered the Milky Way's 13th known satellite galaxy.

The Ursa Major galaxy is a dwarf just 1,600 light-years wide. It shines with the feeble intensity of only 40,000 Suns, making it the lowest-luminosity galaxy ever detected. At a distance of about 350,000 light-years, its tens of thousands of stars appear spread out and practically lost amid Milky Way foreground stars, which explains why the Lilliputian galaxy was so difficult to detect. But its discovery implies there could be many more dwarf galaxies lurking undetected — a fact that could have huge implications for cosmology and dark matter.

Willman's team discovered the Ursa Major dwarf in a systematic search for satellite galaxies using Sloan Digital Sky Survey star data. Willman and her colleagues noticed an excess of red giants in an area 6° southwest of the Big Dipper's bowl. Follow-up observations in early March at the 2.5-meter Isaac Newton Telescope in the Canary Islands confirmed an excess of faint stars in that region, with the stars having the colors and brightnesses expected for a dwarf galaxy 350,000 light-years away. The stars, which contain few elements heavier than hydrogen and helium, could be as old as 13 billion years. 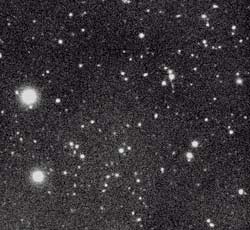 This 24-minute exposure taken at the Apache Point Observatory's 3.5-meter telescope captures very faint stars in the Ursa Major dwarf galaxy as well as much brighter Milky Way foreground stars. The dwarf is the lowest-luminosity galaxy ever found, and the 13th known Milky Way satellite galaxy. The image has been contrast enhanced to make the faintest stars easier to see.

The team notes in its paper, which has been submitted to Astrophysical Journal Letters, that the Ursa Major dwarf lies just above its detection threshold. This implies that there could be dozens of similar dwarf galaxies buzzing around the Milky Way like a swarm of bees.

"One of the reasons this discovery is so interesting is its relevance to the missing galaxy problem," says Willman. This is where dark matter comes into play. Computer simulations that invoke slow-moving particles as dark matter do a very good job of explaining why galaxies congregate into giant clusters and filaments. But these so-called Cold Dark Matter models also predict that the Milky Way and other large galaxies should be surrounded by many more dwarfs than astronomers have observed.

These "missing galaxies" are not necessarily luminous, however. Theory suggests that most of them could be clouds of dark matter, without any stars to light them up. By compiling a more complete census of Milky Way satellite galaxies, Willman's team will enable astronomers to test various dark-matter models, along with models that predict how gas in dark-matter-dominated clouds cools enough to form stars. These models make differing predictions of how many dark-matter clouds should have visible dwarf galaxies within them.

The Ursa Major dwarf also gives astronomers a window to the early universe. "Finding and studying nearby galaxies with luminosities as low as the Ursa Major dwarf will help us get at the physics that controls galaxy formation at the extremely low-mass end," says Willman. "Since dwarf galaxies are thought to be the building blocks of larger galaxies, and the first galaxies to form in the universe, this also will potentially impact our global understanding of galaxy formation. I look forward to studying this galaxy in detail."

The newly discovered galaxy is located 6 degrees southwest of the Big Dipper.

Although the Ursa Major dwarf's very nature does not lend itself to beautiful astrophotographs, amateur astronomers armed with large telescopes and CCD cameras can capture some of its brightest stars, which shine at 19th magnitude. The galaxy is centered at right ascension 10 hours, 34 minutes, 56 seconds, declination +51° 54' 43". It appears about one-third of a degree wide. By imaging that field through red and blue filters, and then imaging a nearby field with the same technique, amateurs could detect an excess of blue stars in the first field — most of which will be members of the Ursa Major dwarf. If you think you have imaged stars in this galaxy, submit your pictures to observers@SkyandTelescope.com.

Meanwhile, an international team led by Avon P. Huxor (University of Hertfordshire, U.K.) has found three star clusters near the Andromeda Galaxy (M31) that are difficult to categorize. These objects are slightly more luminous but more compact than the Ursa Major dwarf. "They may simply be diffuse globular clusters, or they could be compact dwarf galaxies, or the remnants thereof," says Willman. "Or maybe things aren't as simple as "globular clusters versus dwarf galaxies." Their properties, as they are currently known, are intermediate between the two classes of objects."

Report from the 2019 Advanced Imaging Conference

The Curious Case of Martian Methane

Exomoon or No Exomoon?