The Moon Through an 8-Meter Eye 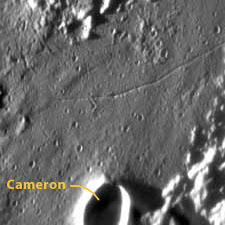 The 8-meter Yepun Telescope captured this close-up view around the lunar craters Taruntius and Cameron. Using adaptive optics to obtain an angular resolution of only 0.07 arcsecond, astronomers uncovered features as small as 130 meters across.

European Southern Observatory astronomers have used a new adaptive-optics system on the 8.2-meter Yepun telescope, the fourth unit of the Very Large Telescope (VLT) at the Paranal Observatory in Chile, to produce what may be the highest-resolution image of the Moon ever attained from Earth.

The field of view shows an area of 60 by 45 kilometers (37 by 28 miles) between Mare Tranquillitatis (Sea of Tranquillity) and Mare Fecunditatis (Sea of Fertility), some 700 km from the Apollo 11 landing site. The crater at the bottom of the top inset image, Cameron, is 10.9 km in diameter and lies on the eroded rim of the older, 56-kilometer-wide crater Taruntius. 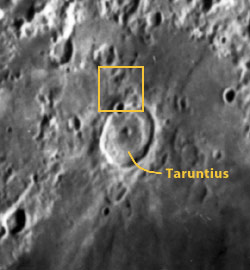 Taruntius, located near Mare Crisium, is a 56-kilometer wide crater. Its neighbor, Cameron, is 10 kilometers wide.

The exposure was taken through a narrow-band near-infrared (2.3-micron) filter on April 30th during testing of the NAOS-CONICA (NACO) adaptive optics camera. The image measures 25 arcseconds across (as seen from Earth) and reveals an incredible number of tiny craterlets and detail as small as 0.07 arcsec, or 130 m on the lunar surface — very close to the theoretical resolution of the telescope at this wavelength.

Under normal operating conditions, NACO assesses the atmosphere-induced image smearing of a guide star up to 500 times per second. It then constructs a clear view each moment by making corrections to a flexible mirror in the telescope's light path. On this occasion the astronomers used a sunlit lunar mountain peak as their "guide star" during the 0.22-second integration. 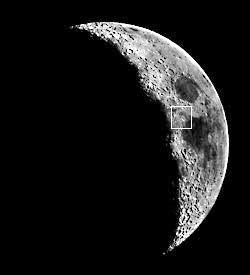 The Moon at waxing crescent.

Given that the nominal seeing at the time was 1.5 arcseconds, a twenty-fold increase in resolving power is a remarkable achievement. Greatly encouraged by this experience, ESO astronomers may image other areas of the Moon in the future via this technique.

Further information and images may be found in the press release from ESO.