We call our Sun an “average star.” It’s average because its size and brightness fall smack dab in the middle compared to stars throughout the universe. Some stars make the Sun look like an ant standing next to Abe Lincoln; others, an elephant overshadowing a ladybug.

Stars differ in mass much less than they do in diameter or brightness, but they still cover a wide scale. The lightest stars have about 1/12 the Sun’s mass (any lower and they can’t sustain nuclear fusion), while the most massive top scores more. 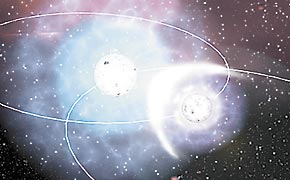 Artist's concept of two hot, blue supergiants in a binary pair. Winds from the stars collide, forming an X-ray emitting shock front (thick white arc at center) that wraps around the less powerful of the two stars. The team reports no shock in their data, although such massive stars will have powerful stellar winds.

So how heavy can a star actually be? For the universe’s present era, astronomers assume an upper limit of about 100 solar masses. This number comes from the need to preserve something called hydrostatic equilibrium. The term means that the two main forces working on a star have to balance out. One is gravity, which pulls a star together. The other is — no joke — the pressure of the star’s own heat and light.

As energy streams out of the nuclear-fusing core, the photons push outward on the star’s layers. This pushing is called radiation pressure. For supermassive stars (which create a lot of heat and light), the radiation pressure on the star’s outermost layers overcomes the inward pull of gravity, blowing layers away as a stellar wind. This critical ratio between mass and radiation intensity is the Eddington limit, named after the astronomer who first figured it out in the 1920s.

But astronomers have a hard time observing this upper mass limit in the universe. The problem is that high-mass stars are rare. They don’t form often, and when they do they burn themselves up much faster than smaller stars. The most massive stars may only live for a few million years (the Sun, on the other hand, will burn hydrogen for about 12 billion years). Even with today’s equipment astronomers still have yet to identify any stars weighing in at 100 solar masses.

That’s not to say the theory’s wrong. Astronomers have found a handful of stars in the 85-solar-mass range. But the data have everyone wondering: are there any 100-solar-mass stars?

A team at the University of Montreal now answers a tentative yes. Looking deep into NGC 3603, one of the youngest and most massive star clusters in the Milky Way, the scientists studied five extremely luminous stars. One is an only child, and the others are in two binary pairs. For one of the binaries, the team used shifts in the two stars’ spectral lines caused by the stars’ speeding around each other to calculate a rough mass for each companion. They came up with 85 to 145 solar masses for one, 75 to 105 solar masses for the other.

Those are large uncertainties, and the team knows it. They plan to go back for higher quality data. Even with the possible error, though, their paper still claims the 85-to-145 star is “the most massive star ever directly weighed.” If so, it will be a feather in theorists’ caps.