The Most Puffed-Up Planet 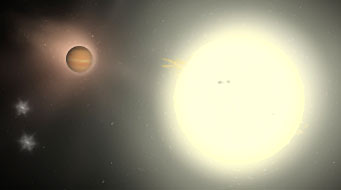 TrES-4 closely orbits a yellow subgiant star (artist's concept). The star shines at magnitude 11.6 from about 1,400 light-years away in Hercules. The oddly puffy planet circles it every 3.6 days.

Of the 249 known extrasolar planets, astronomers most prize the 24 that transit (cross) the faces of their stars from our viewpoint. The amount that the star's light gets dimmed tells the diameter of the planet passing in front of it. The fact that the planet transits at all pins down the orientation of its orbit and, therefore, its correct mass. In a few cases, transits have even allowed astronomers to detect the spectral signatures of compounds in the planet's atmospheres and to create a crude temperature map of the planet's surface.

The latest transiting planet, announced on August 6th, breaks new ground. TrES-4 was found by the Trans-atlantic Exoplanet Survey (TrES, pronounced "trace" as in Spanish) — a project using small, automated cameras to electronically monitor thousands of stars in selected patches of sky. TrES-4 turns out to have a diameter 70% larger than Jupiter, more or less matching the previous record-holder, Corot-Exo-1b. However, unlike Corot-Exo-1b which has 1.3 Jupiter masses, the new find has only 0.84 of Jupiter's mass. That gives it an average density of 0.2 grams per cubic centimeter: a fifth the density of water, about that of balsa wood. 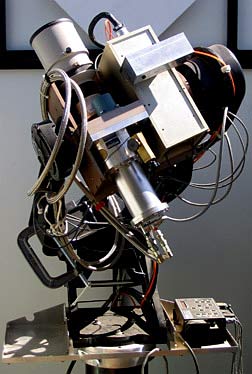 The PSST camera at Lowell Observatory in Arizona was the first in the TrES network to notice the slight dips in brightness of TrES-4's star.

This is weird. About half of the transiting "hot Jupiters" discovered so far are puffed up to larger-than-expected sizes by some kind of internal heat source (see A Plethora of Puffy Planets), but this one takes the cake. "TrES-4 appears to be something of a theoretical problem,” says Edward Dunham, Lowell Observatory instrument scientist, in a press release. "It is larger relative to its mass than current models of superheated giant planets can presently explain. Problems are good, though, since we learn new things by solving them."

“We continue to be surprised by how relatively large these giant planets can be,” adds Francis O’Donovan, a graduate student in astronomy at the California Institute of Technology, who operates one of the TrES cameras. “ But if we can explain the sizes of these bloated planets in their harsh environments, it may help us understand better our own solar system's planets and their formation.”

Here's the TrES team's paper on the discovery.

Web Tip: The Extrasolar Planets Enyclopaedia, maintained by Jean Schneider at Paris Observatory, is the world's central repository for information about all known exoplanets, as well as about all exoplanet searches under way or planned. Lots of good reading.